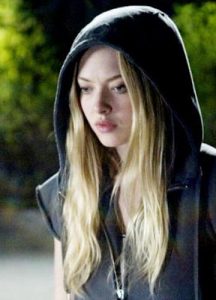 Rock band decides to sacrifice a virgin in hopes of getting the devil invested in their career prospects. But they pick the wrong girl, and gruesome, gory, utterly hilarious consequences ensue.

You can almost hear director Karyn Kusama (Girlfight) screenwriter Diablo Cody (Juno) laughing on the soundtrack—baiting their audience with kissing babes and gallons of fake blood. Cody and Kusama gleefully subvert a century’s worth of horror film tropes… and me? I’m laughing too! (JLH: 4/5)

“Nikolai Wolf,” the kohl-eyed lead singer of Low Shoulder, is oh so tired of playing in backwater bars. When he learns that their next gig will take them to Devil’s Kettle, MN, Nikolai (Adam Brody) has a brainstorm: find a virgin, sacrifice her at the eponymous waterfall, and surely Satan himself will soon come a callin’.

Wholesome blonde “Needy” (Amanda Seyfried) screams in terror as her BFF “Jennifer” is lured away, and even though she’s used to having her way with men, sultry brunette “Jennifer” (Megan Fox) is a bit afraid too. But she gets into Low Shoulder’s black-window van anyway.Sorry, Nikolai: you picked the wrong girl! The joke is on you and gruesome, gory, utterly hilarious consequences ensue.

I did my best to walk into the theatre open-minded. On the one hand, I’m a big fan of director Karyn Kusama. I loved her first film Girlfight, and I also enjoyed her second film Aeon Flux a great deal. (Despite negative spin from film critics, Aeon Flux actually did pretty well at the box office, especially compared to other women-directed films released in the past decade.)

On the other hand, I hated Juno, so the very thought of seeing a new film by screenwriter Diablo Cody set my teeth on edge. But even as I watched Juno for the first time (and then the second time), I always had the nagging suspicion that lots of, ahem, “rough edges” had been smoothed out along the way. Despite Oscar nominations all around, in my own heart I never quite believed that Juno’s creator had intended her to be quite as cute and cuddly as Ellen Paige played her.

So watching the onscreen relationship between Jennifer Check and Anita “Needy” Lesnicky was pure pleasure for me. Megan Fox is best-known as “the girl” in the Transformers series (a part that required a beautiful body), and Amanda Seyfried is best-known as “the daughter” in Mama Mia (a part that required a sweet face). Between the crashing cars in the first and the ebullient elders in the second, both young actresses needed little more in their acting repertoire than firm command of reaction shots. But both Jennifer and Needy are multi-dimensional characters who grow and change as this new film unfolds.

In her opening voice-over, Needy tells us she and Jennifer have been together since their sandbox days, and they both wear matching heart-shaped BFF necklaces to prove it. (BFF means ““Best Friends Forever” in cyber-speak.) But with all the pressures imposed by disparate high school cliques, childhood loyalty is an ever distant memory. Needy is conflicted: she’s certainly aware of the fact that Jennifer uses her for cover (Jennifer thinks she looks especially luscious when she’s standing next to nerdy Needy), but Needy still likes going on adventures otherwise above her station.

When Jennifer asks Needy to accompany her to The Carousel on the fateful night, Needy’s boyfriend “Chip” (Johnny Simmons) is baffled. Needy won’t stay home with him because she has to go out with Jennifer? And she has to dress down in order to make Jennifer shine? It makes no sense to him. Well, of course not. Chip is not, hasn’t been, and will never be a teenage girl! But Needy’s always understood the quid pro quo in her relationship with Jennifer, and she’s always been willing to pay to play until the trip to The Carousel changes everything. 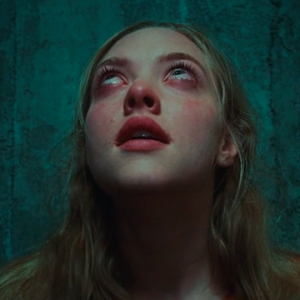 Unleashing mayhem, Cody and Kusama gleefully subvert a century’s worth of horror film tropes: this time girls are the monsters and boys are the victims. Jennifer easily seduces her prey (first the jock, then the goth), and with each conquest, her long, beautiful hair becomes ever more lustrous. Needy notices immediately (a touch of envy beneath her alarm). Maybe there’s a tear in the universe, but there are no split ends in Jennifer’s coiffure.

But her new powers grow boring, so a lonely Jennifer flirts with Needy, pouncing on her like a cat attacking a toy mouse. Enraged when Needy still keeps her distance, Jennifer zeroes in on Chip, until finally Needy understands that it’s up to her to save the day.

You can almost hear Cody and Kusama laughing on the soundtrack – baiting their audience with kissing babes and gallons of fake blood. And me? I’m laughing too, even when I’m biting down on my sweater, squeamish every time Jennifer bares her fangs.

I especially love the moment when Needy breaks out of the loony bin to pursue Low Shoulder. It’s a riff on the famous ending scene in One Flew Over the Cuckoo’s Nest, where “Chief Bromden” played by Will Samson makes his great escape.  Cuckoo’s Nest received five Oscars, including Best Picture of 1976, but it’s one of the most misogynistic films I’ve ever seen, so the brief homage in this context literally tickled me pink.

Comedy often defines the line between who’s in and who’s out. If you really get the joke, you can’t help laughing. If you sit there stone-faced (“I get that it’s a joke, but it isn’t funny”), then maybe you get it in your head, but you don’t get it in your gut, in other words, you really don’t get it.  I say this after listening to jokes for years and years and years that left me cold (or worse)—yes, I knew they were supposed to be “funny,” but to me they sounded anti-Semitic or misogynistic or racist or crude or just plain dumb. Whatever . . . I laughed my head off at Jennifer’s Body and I hope you do too. 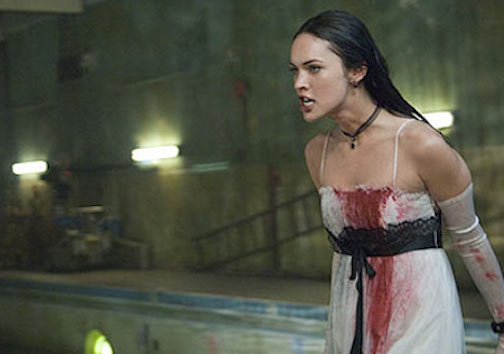