“Kate” (Catherine Keener) lives in a cramped Manhattan apartment and owns a resale shop specializing in vintage furniture. Shes been comfortable in her own skin for years, but as the film opens, somethings bugging her, and that something is her 90-year-old neighbor “Andra” (Ann Guilbert). The smell of death is suddenly permeating her home as well as her business, and Kate is spooked.

“Liberal Guilt” is an easy target for a comedy writer. Holofcener has a great time making us laugh at Kate’s expense, and Keener, as the film’s anchor, gracefully plays the butt of every joke. A woman like Kate will always fall short of her own ideal, but what’s the alternative? The clocks just keep ticking, and in Holofcener’s world, giving up is far worse than failing.

Holofcener’s three prior films all had wonderful moments, but this time the whole really is greater than the sum of its parts. Bravo! (JLH: 4.5/5)

Please Give is a spring flower. When I left the screening room, I carried it with me like a bud, and for two days now I’ve watched it unfurl. This is the first Nicole Holofcener film to make me feel so enraptured. Going into Walking and Talking, Lovely & Amazing, and Friends with Money, I’d hoped for the best, but left disappointed. For sure all three of Holofcene’rs prior films had wonderful moments, but none of them quite came together for me. This time, though, the whole really is greater than the sum of its parts.

Kate (Catherine Keener) and her husband Alex (Oliver Platt) live in a cramped Manhattan apartment with their daughter Abby (Sarah Steele), and while they’re certainly comfortable, they’re definitely not wealthy people. In fact, in New York terms, they’re practically paupers. Middle-aged and middle-class, Kate and Alex are also middlemen:  they own a resale shop specializing in vintage furniture, and their stock comes primarily from estate sales.

“Vintage,” “estate sale,” these are nice words, but the reality is that Kate and Alex spend most of their time sorting through the personal possessions of the recently deceased. Once upon a time, people treasured items handed down to them by loved ones: Mama’s table, Papa’s chair. But these days most of us would rather buy our own “stuff,” and when people die we call in experts (like Kate and Alex) to price their residue and cart it away.

First Kate comforts the bereaved, then she watches competitors cherry-pick her booty. She’s been doing this job for years, and she knows she’s only one part of a long merchandise chain. Her good taste is matched by a solid reputation, and she has no illusions. But as the film opens, something’s bugging Kate, and that something is her 90-year-old neighbor Andra (Ann Guilbert). The smell of death is suddenly permeating Kate’s home as well as her business, and she’s spooked.

Andra’s primary caregiver, her granddaughter Rebecca (Rebecca Hall), is a young woman in her late 20’s with the patience of a saint. Every day, Rebecca arrives with groceries, walks the dog, and does everything she can to be helpful and cheerful as Andra’s world shrinks down to the confines of her apartment. Kate and Rebecca have been passing each other in the hallway for years, and Rebecca knows that Kate and Alex have already purchased Andra’s apartment. So rather than face her own concerns about Andra’s failing health, Rebecca stews about Kate, mentally accusing her of measuring out the minutes of Andra’s remaining time on earth.

Rebecca’s not wrong. When the time comes to knock down the adjoining wall, combining the two apartments will have obvious benefits (especially for teenage Abby in her “ugly duckling” phase). But Kate isn’t doing anything to hasten Andra’s journey, in fact money from the sale is probably making it possible for Andra to stay put. Nevertheless, to assuage her guilty conscience, Kate decides to have a party, inviting both of Andra’s granddaughters: moon-faced Rebecca as well as her spiky sister “Mary” (Amanda Peet).

Ann Guilbert is a hoot as the irascible Andra, a feisty crone determined to live life on her own terms for as long as possible. She may depend on Rebecca, but it’s Mary, someone with her own sharp-tongue, who is her favorite sparring partner. Watching her grandmother and her sister go at it, Rebecca Hall responds like a floppy-eared dog caught between two tigresses. She’s much too sincere to get a word in edgewise, and Hall’s body language makes it clear that she stopped trying years ago.

Amanda Peet bites into Mary’s sarcastic dialogue, gleefully seducing Sarah Steele’s eager Abby (who thinks Mary is the cats meow), and slyly flirting with Oliver Platt’s bemused Alex (even though he knows Kate is watching). Keener, as the films anchor, turns Kate into a classic “straight man,” gracefully playing the butt of every joke. The birthday scene is a comic gem, with every member of the ensemble rising to the occasion. 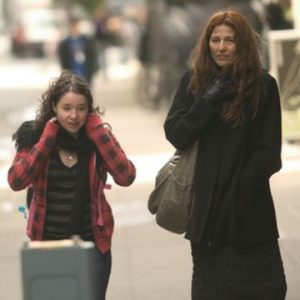 Holofcener’s multidimensional characters are all true to a very specific milieu, but the emotions swirling inside them are universal and deeply resonant. It’s autumn in New York, and everyone’s chattering about the leaves. After the birthday party, Rebecca gives in to the hype and takes Andra out for a drive in the country. Unexpectedly moved by the wild burst of color, Rebecca finally resigns herself to Andra’s inevitable death, even as Andra, standing right beside her, keeps right on kvetching. You don’t have to live in Manhattan to appreciate the poignancy of this scene.

Meanwhile Kate is fretting about a vase, also painted in fall colors of red and gold. She bought it from man who was eager to unload his dead mothers “junk” as quickly as possible, but the vase has turned out to be surprisingly valuable. Kate’s in a quandary, so she decides to return it. The man thanks her, takes the vase, and politely shuts his door. Close up on Kate’s self-satisfied face crumbling as she hears the sound of vase hitting wall.

“Liberal Guilt” is an easy target for a comedy writer, and Holofcener has a great time making us laugh at Kate’s expense. Try as she might, Kate cannot save the world. Her daughter Abbys complexion and body type are as fixed and immutable as the hunger and poverty outside their front door. So why try? Because Holofcener genuinely believes that giving up is far worse than failing. If Kate stopped trying, then Please Give would be a tragedy.

It’s hard to be a “good person” in this screwed up modern world of ours. A woman like Kate will always fall short of her own ideal. Alas, there is no alternativethe clocks just keep ticking. Please Give is a new variation on an old Borscht Belt punch line: “The food is awful and the portions are so small!”

Unfortunately I was away when Holofcener came to Chicago to meet with local press, so I missed my opportunity for a face-to-face conversation with her about “Please Give.”  Here’s her Director’s Statement from the press kit (which I read after I saw the film).

A friend’s apartment in New York was both the source and the setting for Please Give. My friend bought her elderly neighbor’s apartment, just as the couple does in the movie, and they became good friends. When it came time to find a location for the film we ended up shooting in that actual building, and in one of its apartments.

One of the great things about living in New York (if you have money) is being able to buy a beautiful place and fill it with beautiful things. But how do you do that and feel okay about it when there are hungry people right outside your (beautiful, newly stripped solid walnut) door? I’ve been struggling to forgive myself for those contradictions my whole life, and I think that’s a struggle I heaped upon my characters, especially Kate. We tend to instantly sympathize with people who are struggling, so even though my characters do some unattractive things, I hope we can forgive them, especially while we laugh at them.

Please Give begins with a montage of mammograms. Mammograms are like life: potentially tragic but really funny looking. You’re stripped semi-naked, divested of dignity, shivering with cold and filled with dread. It’s ridiculous but very necessary. With Please Give I wanted to illustrate these kinds of contradictory moments that make us human. 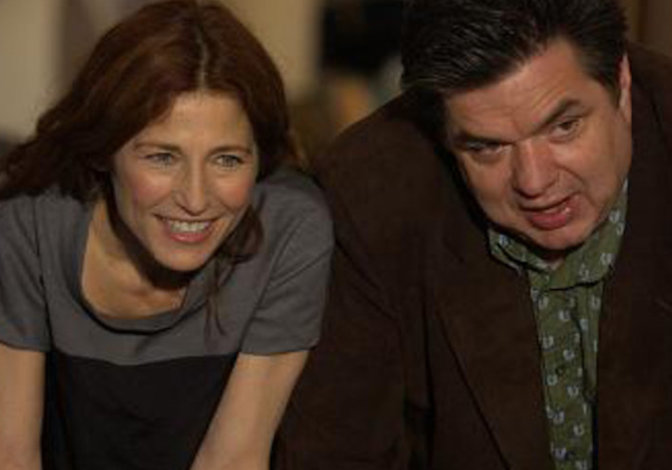 Bottom Photo: Catherine Keener and Oliver Platt as as “Kate” and “Alex.”