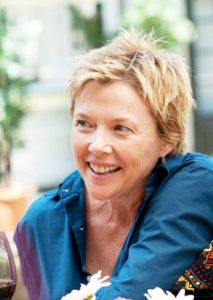 Teenagers “Joni” (Mia Wasikowska) and “Laser” (Josh Hutcherson) are half-siblings raised by lesbian couple “Jules” (Julianne Moore) and “Nic” (Annette Bening) who used the sperm of a single donor. Joni’s just about to leave for college, but before she goes Laser convinces her to help him track down their bio-Dad. Joni’s call comes totally out of the blue, nevertheless “Paul” (Mark Ruffalo) immediately agrees to meet with them.

The first half of The Kids Are All Right is delightfully funny. The characters have their individual quirks, but they’re all sympathetic and engaging, and the casting is perfect. Then it all goes wrong, spinning from family dramedy into sex-farce before collapsing into a politically-correct message movie that literally ends in a big group hug.

Focus Features is devoting a lot of resources to the Kids marketing campaign, and I wish them all best because I’d really like to see more Lisa Cholodenko films in future. So go with moderate expectations and you might well have a fine time. (JLH: 3.5/5)

I really, really wanted to like this film. I’m a big fan of High Art (writer/director Lisa Cholodenko’s first film), and I liked her second film, Laurel Canyon, too, so I was excited when I heard she was about to release a new film. But now that I’ve seen it, pondered awhile, and seen it again, I just have to bite the bullet and face facts: The Kids Are All Right just doesn’t work for me.

It’s summertime in southern California, and teenage “Joni” (Mia Wasikowska) is getting ready to start college. This is a traumatic rite of passage for all nuclear families, but Joni’s family structure makes for additional complications. Her younger brother “Laser” (Josh Hutcherson) is actually her half-brother, and they’ve been raised by a lesbian couple they refer to as “the Moms.” “Nic” (Annette Bening) is their ambitious, perfectionist breadwinning Mom, and “Jules” (Julianne Moore) is their docile, nurturing, homemaking Mom.

Anxious about life without Joni home to buffer, Laser asks her to track down their bio-Dad. Since Joni is already 18, she’s legally empowered to contact the sperm bank; at 15, Laser is at her mercy. Joni is surprised and reluctant (“This will hurt Moms’s feelings.”), but the urgency of his plea (“I’ve never asked you for anything before.”) weighs on her conscience, so Joni makes the call.

Cut to “Paul” (Mark Ruffalo), the owner of a trendy local restaurant for which he personally grows produce on an urban mini-farm. His life is full of wine, women, sex, and sun, but when the sperm bank calls, he says sure, fine, no problem, and in the blink of an eye, Paul finds himself face-to-face with two teenagers in search of a father figure.

The first half of The Kids Are All Right is delightfully funny. The set-up is loose and easy; the pace is sharp and quick. The characters have their individual quirks, but they’re all sympathetic and engaging, and the casting is perfect. Wasikowska looks a lot like Bening and captures many of her mannerisms, but she also has a natural physical rapport with Ruffalo. Hutcherson looks a lot like Ruffalo, but he also embodies Moore’s inner glow. Then it all goes wrong, spinning from family dramedy into sex-farce before collapsing into a politically-correct message movie that literally ends in a big group hug.

I see lots and lots of films every year (upwards of 300), so I’m used to leaving theatres disappointed, but in this case I’m genuinely distressed. I’m sure Cholodenko’s primary goal was to tell a good story. (As my husband/partner Richard always says: “No one ever tries to make a bad movie.”) But I suspect she also wanted to make a commercially successful movie, and that’s an uphill battle for all women filmmakers these days, especially lesbians who want to work from their own experience. 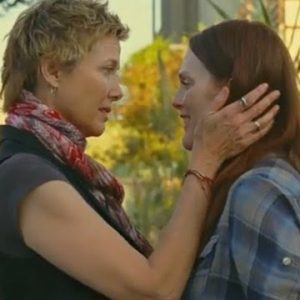 Cholodenko worked alone on her first two films, but Kids has a co-writer, Stuart Blumberg, whose main claim to fame is a romantic triangle comedy called Keeping the Faith. (Will it jog your memory if I say it stars Jena Elfman, Edward Norton, and Ben Stiller? And if I remind you that Norton plays a Catholic priest and Stiller plays his Jewish buddy? Nope, didn’t think so.). Blumberg’s not to blame for what ensues; Cholodenko clearly wanted the input of an experienced male RomCom writer, and that’s exactly what she got.

The big loser is Annette Bening. While Jules and Paul are bouncing around his bedroom, Nic’s stuck at home… drinking heavily, becoming shrill, and turning pathetic. What if Cholodenko and Blumberg had added a work-based scene for her? What if they had given Nic a chance to vent about Joni’s imminent departure and the destabilizing effect it was having on her family? We’ll never know. As it is, Cholodenko and Blumberg set Bening up with a raw, painful dinner party scene, and she hits the ball out of the park, but this boffo performance by an A-List actress occurs too late to redeem her character.

Focus Features is devoting a lot of resources to the Kids marketing campaign, and they’ve embarked on a sophisticated roll-out strategy that seems to have worked well for recently successful Indies like Garden State and Little Miss Sunshine. I wish them all best because I’d really like to see more Lisa Cholodenko films in future. So go with moderate expectations and you might well have a fine time.

SPOILER ALERT:
Please do not read until after you see The Kids Are All Right

There’s one specific moment in Kids when the whole film curdled and turned sour for me. Jules decides to enter the landscaping business and she hires a Hispanic gardener to help with the heavy lifting. Jules has no clients and no references, but Paul hires her to redo his huge multilevel backyard anyway. (Question: Nic is a physician, so her family’s lifestyle is based on a solid professional income, but where is Paul getting all his money???)

So anyway, there’s Jules in Paul’s garden, bent over, thong exposed, digging in the fragrant earth. And there’s “Luis” (Joaquin Garrido) watching as Paul drools from above, the lord on his balcony surveying his domain. But we’re still in comedy mode, so the audience is encouraged to laugh right along with Luis, and laugh we do, right up to the moment that Jules fires him.

This is a film that wants us all to applaud alternative lifestyles, but then uses its only Hispanic character as a totally dispensable comic scapegoat. There’s also one Asian character (male) and one African American character (female) that get the same short shrift. So me, I had a hard time smiling when all those LA Anglos were hugging each other at the very end. 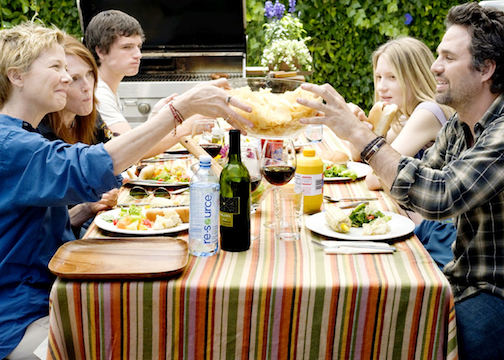