Misunderstood is a fantastic cinematic memoir based on director Asia Argento’s childhood as the daughter of a famous filmmaker.

Primarily known as an actress in French films (like Catherine Breillat’s The Last Mistress), Argento collaborated with Italian writer Barbara Alberti to tell the story of her upbringing from the perspective of her nine-year-old self.

Semi-autobiographical film directed and co-written by Asia Argento  shows “Aria” (Giulia Salerno) and her famous family living in Rome circa 1984. Her volatile mother and handsome father (Charlotte Gainsbourg and Gabriel Garko) are a prosperous, well-to-do, French/Italian family with daughters from previous marriages, immediately setting up an opposition between the father and his daughter “Lucrezia” (Carolina Poccioni) and the mother and her daughter “Donatina” (Anna Lou Castoldi). Their one shared daughter–Aria–feels the monkey in the middle, so she finds comfort in her two consolations: best friend “Angelica” (Alice Pea) and “Dac” (the stray cat who she treats as a guardian angel).

Misunderstood is a wonderfully imaginative story about this young girl living in difficult family circumstances. Early on, her parents split up (which is obvious in the opening moments) and her father moves away with spoiled Lucrezia. When Aria acts up, and she is sent to live with her father, Lucrezia’s witch-like behavior provokes Aria into fights. Of course Lucrezia complains to “Padre” (who never gets his own name), and he sends Aria right back to her mother’s house. 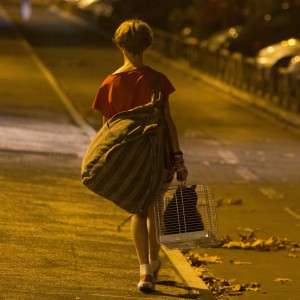 At a certain point, as Aria treks back and forth between households with only her backpack and her cat, it becomes clear that some of this is “only” imagination–but no less deeply felt. Emotional story elements told from Aria’s POV are on the edge of reality; although it’s hard to believe that her childhood was totally chaotic, it must certainly have felt that way to her as a nine-year-old.

The other half of the story, aside from her difficult life with her parents and half-sisters, is her life in school and her relationship with Angelica. She and her best friend are typical “tweens.” They each refer to the other by the pet name “First” to indicate that they are best friends (i.e. you are “the first” to me). But at a certain point, as Aria’s life gets more and more out of control, one of the popular girls tries to peel Angelica away, making Aria feel even more abandoned. She is very bright and accomplished, but even being the daughter of a famous actor doesn’t fully protect Aria. And since the other kids intuitively respond to Aria as weird, imaginative, and kinda “out there,” it comes as no surprise when Angelica eventually has to choose between her BFF and all the rest.

Misunderstood pulled me into Aria’s wonderfully vivid reality, swirling with emotions and imaginative flights of fancy. I left with new insight into how a girl can find total comfort in the embrace of her big purring cat, even as she longs to find her place in the adult world.

Absolutely, positively, yes. Although Aria does have some scenes with her father, most of Aria’s interactions are with her mother, her half-sisters, and her best friend. There are also a couple of small but significant scenes with her [female] teacher.

All in all, Aria’s world skews heavily and poignantly female… but what about Dac…? Who knows 😉