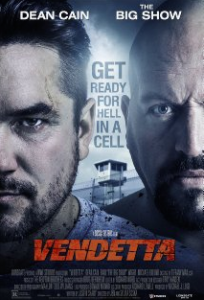 Vendetta follows “Mason Danvers” (Dean Cain) a cop who goes on a killing rampage of revenge after his wife is brutally murdered by a criminal that he put away. What can I say? The film was a mess of terrible acting, predictable plot, and disjointed cinematography. (JEP 1.5/5)

Directed by twin sisters Jen and Sylvia Soska, Vendetta tells the story of a hero cop who goes bad when his wife is murdered. When the film opens, “Mason Danvers” (Dean Cain) and his partner “Joel Gainer” (Ben Hollingsworth) are in pursuit of big-time criminal “Victor Abbot” (Paul Wight aka The Big Show for WWE fans).

After a few poorly choreographed fight scenes, and silly blood spurting gun shot wounds, Danvers manages to take down the notorious Victor Abbot. Danvers is the hero cop to everyone around him, but Abbot vows to take him down before he is carted away to jail.

Abbot goes to prison and Danvers goes home to his loving wife. They are a picture perfect couple, in the process of trying to start a family. Then unexplainably (gasp!) Abbot gets released from prison, somehow pardoned for his many crimes. The first thing he does after getting out? Goes to Danvers’ house and murders (with unnecessary and gore and brutality) his wife.

After his wife is gone, a switch flips within Danvers. The hero cop becomes cold-blooded killer on a rampage of revenge. Abbot has been sent back to prison (because he killed a woman obviously), so Danvers’ solution is to get himself sent to prison as well. How does he do it? Well, he goes and kills Abbot’s whole “criminal squad” and gets sent away for murder.

Inside the prison, Abbot is in charge—although in reality he controlled by the corrupt Warden Snyder (Michael Eklund). To tip the balance of power and get his revenge, Danvers begins killing Abbot’s men one by one, until the “final showdown” between Abbot and Danvers (and well, every other inmate and employee inside the prison).

Paul Wight relied more on his large physique (the man is 7 feet tall and 425 pounds) than any acting prowess to play the convincing villain, and he didn’t quite pull it off. Unfortunately, he is not the only one. While Cain and Hollingsworth were both just okay, Michael Eklund who played the corrupt Warden, was an unfortunate disaster. While he did capture the slimy essence of his character, his acting was overly forced and at times laughable. The whole time he appeared to be saying, “look what I learned in my acting class.” Sigh.

For some reason, the Soska sister’s found no fault in using what appeared to be an entirely different camera for the outdoor tracking shots. This decision took a film that could have been decent and made it one I just shook my head at as I left the theater. In all honesty, Vendetta belongs in the straight to video on demand category, as it just does not cut it for the theaters. Go see at your own risk. 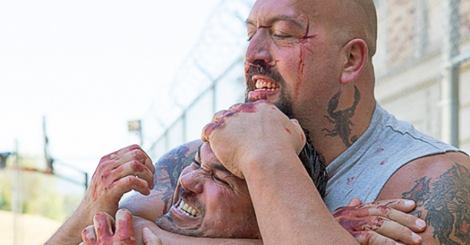