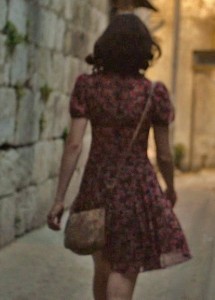 Canadian filmmaker Sophie Deraspe has made a stunning docudrama about a French woman caught up in an online scam during the early days of The Arab Spring. Is this effective filmmaking? Definitely! Is this ethical filmmaking? I’m not quite sure. (JLH: 3.5/5)

A filmmaker’s quandary: If you really believe in the relevance and resonance of a story, should you do everything in your power to grab people’s attention, even if that means shaping your story to fit the moment?

A film critic’s quandary: If you are reviewing a documentary that is relevant and resonant, should the importance of the story being told be diminished in any way by the quality of the storytelling?

Since one of my criticisms of A Gay Girl in Damascus: The Amina Profile is that filmmaker Sophie Deraspe assigns herself a critical role in her 84 minute docudrama, but never tells us anything about herself and how she found herself so deeply involved in this story, I think I should start by saying a couple of things about myself.

I have been a professional film critic since 2004. In late 2003, the editor of a new Chicago-based publication called the World Jewish Digest asked me to write a 10th Anniversary Tribute to Schindler’s List for her December issue. The publisher liked it, so I became the WJD’s designated film critic, writing regular reviews for every issue from March 2004 through September 2005. In October 2005, I moved to the JUF News where I continue to write regular film reviews as well as additional freelance features today (a full ten years later). I now do all the things a writer does these days–some compensated, some not–including blogging, speaking, self-publishing, and posting on social media.

In the decade plus that I have been writing reviews professionally, I have developed some rules for myself. My first rule is to go into new films as “blind” as possible, so I can assess what is actually on screen rather than what I go in expecting to see. My second rule is to focus my review on the first half of a film (the set-up) and never give away what happens in the second half. When I want to talk about the second half, I put my comments at the very bottom of my post, below a prominently-placed SPOILER ALERT warning.

In this case, I can honestly report that I went into A Gay Girl in Damascus knowing absolutely nothing about Syrian blogger Amina Arraf. I also knew nothing about either the 2010 film Catfish (which boasts an 80% Fresh rating on Rotten Tomatoes based on an N of 145 critics out of the thousands now aggregated by RT’s Tomatometer), or Catfish: The TV Show (a series inspired by the film which is now in its 4th season on MTV).

But once I am alone in the dark, what I see on screen is filtered through decades of prior life experience, which in my case includes not just thousands of hours of watching and writing about films, but graduate degrees in cognitive psychology, management experience in information services, and a lifetime of commitment to Feminist causes.

That person–the person who went into A Gay Girl in Damascus: The Amina Profile blind–was deeply moved by the story she had seen on screen. I literally left the theatre shaking. Insofar as Sophie Deraspe set out to “hook me” (words I must put in quotes here because of the whole catfishing theme), then she certainly succeeded. But then I spent a good part of the next twelve hours on Google, and awoke this morning with qualms… I won’t say any more about my qualms now. You will find those details below… under the SPOILER ALERT. 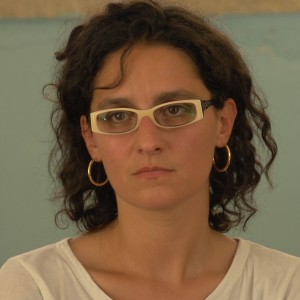 The primary POV in A Gay Girl in Damascus: The Amina Profile belongs to a woman named Sandra Bagaria. Sandra is a French woman who now lives in Montreal. How long has Sandra been living in Canada, and why did she leave France in the first place? Who knows! At one point, Deraspe tells us Sandra is Jewish, but what that means to her–if anything–is also a mystery. In fact, Deraspe tells us almost nothing about Sandra–her background, her life, her beliefs, or her motivations–choosing instead to open her film with a reenactment of the moment Sandra Bagaria first connected with Amina Arraf online.

And so, in the first few moments of A Gay Girl in Damascus: The Amina Profile we are introduced to two dark-haired women slowly stripping as they chat. They are standing in front of an open window shaded by a billowing lace curtain, so we don’t see their faces, but we do see their bodies–young, supple female bodies with gorgeous breasts and prominent nipples. Yowza! Of course, I’m hooked! To say Sandra is also “hooked” would be an understatement.

The time frame here is critical. The Arab Spring began in Tunis on December 17, 2000. Amina’s first post on her new Blog “A Gay Girl in Damascus” was February 19, 2011. So the Sandra/Amina relationship blossomed in period of intense international drama. As Sandra fell ever deeper in love with Amina, they discussed all this online while also trading jpgs. (Yowza! Amina’s tits are nothing compared to her even more perfect ass!) Sandra was not Amina’s only fan. Her online presence grew, and soon she was being interviewed–always online–by a journalist from The Guardian. After that, new members of the MSM picked up the story, and the “A Gay Girl in Damascus” Blog went viral.

As protests spread across the Middle East from Tunisia to Egypt and beyond, President Bashar Assad authorized a crackdown on Syrian dissidents. On June 6, 2011, Sandra received a message informing her that Amina had been abducted, presumably by men working for Assad. Sandra–rightfully overwhelmed with concern–launched an online campaign to bombard cyberspace with #FreeAmina demands. The worldwide search that followed reached as high as the US State Department. 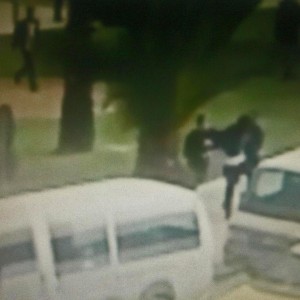 But less than one week later–on June 12, 2011–a man named Tom MacMaster was outed in Edinburgh. There was no Amina. Tom MacMaster–a struggling novelist who had majored in Middle Eastern Studies at Emory University–had fabricated the whole thing… At this point, Sandra Bagaria became a raging fury. Why would someone do this to her? She had been publicly humiliated, so she must be avenged!

And so, Sophie Deraspe pivots her film from the Search for Amina to the Search for MacMaster just as The Arab Spring collapses. Syria splinters into zones controlled by militants of every confession–primarily Alawites (supporting Assas), Shias (supported by Iran), and Sunnis (supported by Saudia Arabia)–while Christians, Kurds, Yazidis, and others are caught in the middle. Millions of Syrians flee for the borders, flooding the neighboring countries of Jordan, Lebanon, and Turkey. Millions more–mostly women and children–are internally displaced inside Syria. 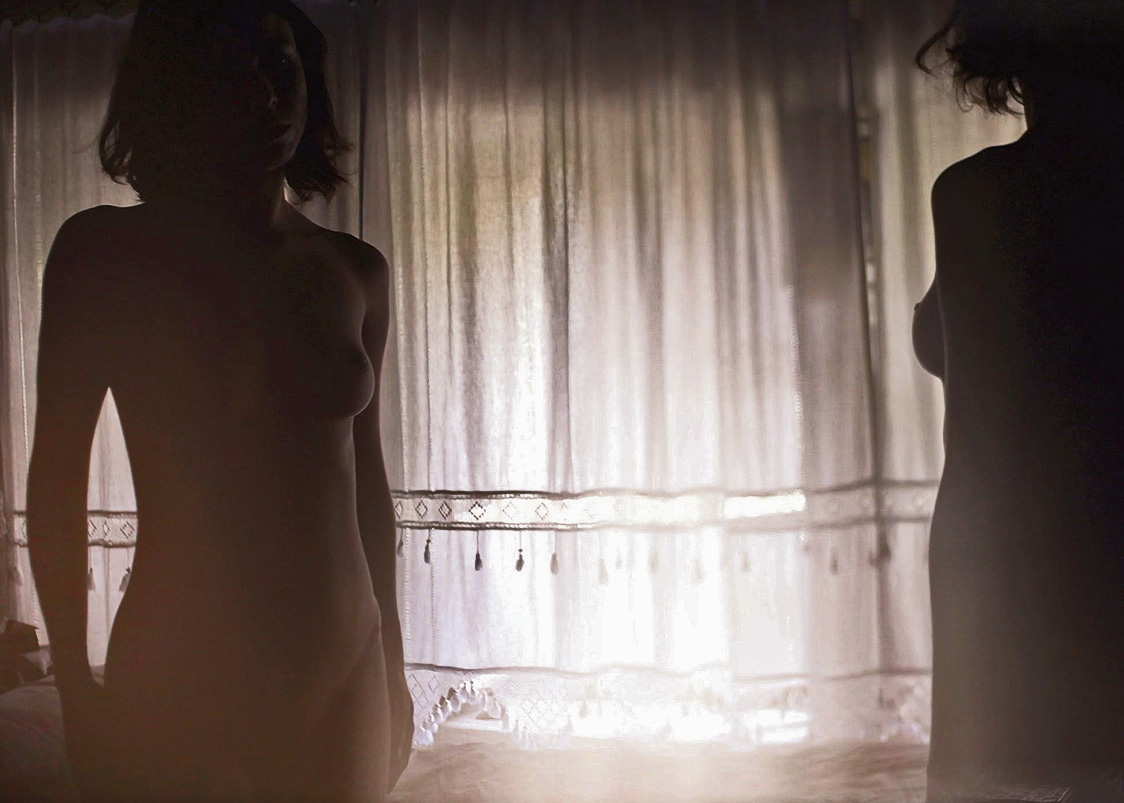 Top Photo: Reenactment of “Amina” walking the streets of Damascus.

Q: Does A Gay Girl in Damascus: The Amina Profile pass the Bechdel Test?

Regardless of who “the real Amina” turnout out to be (which is obviously not the same as she appears to be in the Deraspe’s reenactments of the Amina/Sandra relationship), it goes without saying that both Sandra Bagaria and Sophie Deraspe are real people–now seen everywhere on camera, promoting their film at Sundance and beyond–and they are both women. So just on the basis of the Sandra/Sophie relationship, A Gay Girl in Damascus: The Amina Profile passes the Bechdel Test.

In the course of the film, they also talk to other Lesbian activists as well as women journalists.

What is “my problem” with A Gay Girl in Damascus: The Amina Profile? I have so many problems with this film that I hardly know where to begin…

But start here: After spending most of the the past 24 hours researching and/or obsessing about A Gay Girl in Damascus: The Amina Profile, I am shocked to find myself feeling sorry for Tom MacMaster!

The very fact that Sophie Deraspe begins her film as she does is proof positive that “sex sells,” so I think we need to cut MacMaster a bit of slack. When all is said and done, he made the exact same move then that Deraspe is making now: using sex–in this case super-sexy Lesbian sex–to tempt jaded paletes “for their own good.”

Let’s all be honest now: Would there have been quite so much interest in “Amina” if she hadn’t appeared to be such a dish??? Who wants to hear about what is really going on in Syria??? Much easier for all of us to stay in comfort zones increasingly defined by the non-reality of “Infotainment” and “Reality TV.”

Read the coverage in the Atlanta Journal-Constitution, and Tom MacMaster appears to be a reasonably credible guy with a sincere interest in Syria and The Arab Spring. And judged on its own merits, he appears to be a pretty good writer too. After all–creepy as it may all be–he certainly succeeded in snookering a whole lot of people, so what novelist wouldn’t envy his imaginative verbal abilities? Who says publishers were right to ignore his prior efforts? We all know that the publishing business is totally driven by dollar signs, and it is almost impossible for a new author to break in without a powerful sponsor.

Yes, he hurt Sandra Bagaria, but he also made a lot of people care about what was happening in Syria for awhile, and that’s not nothing. Now Sandra Bagaria is an Indie Heroine who gets to tell her side courtesy of Sophie Deraspe–who has certainly enhanced her own career prospects in the interim–but where is Tom MacMaster? He seems to have vanished from Google, and Wikipedia doesn’t say… He has been cast as “the villain,” and that seems to require that he be obliterated.

Bottom Line: This one is on us. We are the ones who determine the rules of this game. Tom MacMaster played the game for a while. Now it’s Sophie Deraspe’s moment. “We have met the enemy and he is us.“