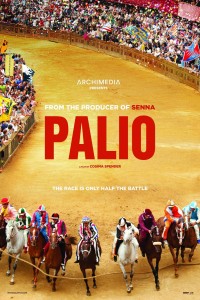 Palio—a centuries old battle—is run two times every summer, a battle where both horse and rider have the chance to bring pride to their district. Directed by Cosima Spender, Palio is a gripping documentary that follows two jockeys who will stop at nothing for the win…but their can only be one. (JEP: 3.5/5)

The Palio is a centuries old battle, where historical disputes dating back to the 1400s are rehashed. Siena, Italy reverts back to age-old districts, each one supporting a different horse and rider in the race.

The districts pay with donations from their people, and even though jockeys ride for a specific district, their loyalties lie only with themselves. The Palio is a game, not a race, where game pieces can be bought. It is a race where cunning is more important than strength.

What’s more, is that the Palio in Siena is the only place where a horse can win without a jockey. If a jockey is thrown from his horse at any point during the race, but the rider-less horse continues on, it has the potential to win for its district. As the film makes clear to its viewers, the Palio is a game played by people, where the horse is the unknown element. 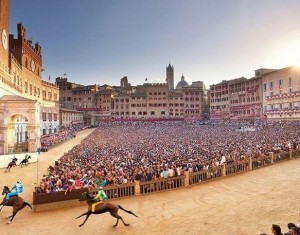 Director Cosima Spender follows two jockeys, both at very different points in their careers. Gigi Bruschelli is a seasoned jockey, having won 13 Palios in just 16 years. Gigi rides with strategy, he is ruthless and is known for bribing other jockey’s to secure his place at the front of the race. Bruschelli is looking to break the world record, and will do so by any means necessary.

Giovanni Atzeni, on the other hand, is just starting his career as a jockey, riding the Palio for the very first time. As Gigi’s former student, Giovanni has been taught by the best but now poses a threat to his mentor’s title. Giovanni pursues glory instead of money, riding simply for the love of the sport. It is this drive that may just set him apart from the competition. The coming summer months bring two chances to win a Palio title, and Giovanni intends to win them both.

Palio boasts an in-depth look into an age-old tradition, and Cosima Spender artfully chose two compelling subjects to focus her film. Even if you have no stake in the world of horse racing, Palio just may spark your interest, at least as far as this centuries-old battle is concerned.

At one point a group of women are gathering for the race and one women asks another for help into the balcony space where they are watching, because she is too intoxicated to do it by herself. But this exchange is just not enough to say the film passes the Bechdel test.