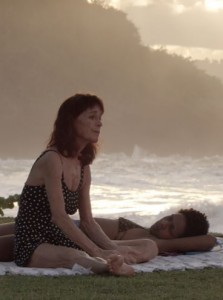 Writer/Director Laura Amelia Guzmán and husband Israel Cárdenas set their drama on the beaches of Las Terrenas, as elderly “Anne” (Geraldine Chaplin) falls in love with a 20-year-old Dominican girl, “Noeli” (Yanet Mojica). The slowly paced, pseudo-LGBT-version of Harold and Maude captures the heartache and pain of growing old as Anne yearns for something, and someone, she can’t have. (BKP: 3/5)

In the opening of Sand Dollars (aka Dólares de arena and adapted from the novel “Les Dollarsdes Sables”) a Mexican singer in a sombrero belts out lyrics of a sad love song, complete with the lyrics “If you don’t love me, it will be the cause of my death.” From the opening scene, the film’s theme is spoon-fed to the audience.

The Mexican anthem leads to a montage of two women frolicking on the beach, playfully swimming in cloudy waters and dancing together in front of backlit windows. Since the filmmakers purposely use shadows and lighting to introduce the characters of Anne and Noeli, their age difference is as unclear as the water they swim in. When their ages are revealed (Anne in her late 60s, Noeli only 20) the striking age difference between the two is bizarre match … and somewhat unbelievable.

That’s because their three-year-old relationship isn’t entirely genuine. Although Frenchwoman Anne is hopelessly in love with vibrant, youthful Dominican Noeli, the feelings are not wholeheartedly reciprocated. Noeli continuously asks Anne for money, claiming that her “brother” is recovering from a motorcycle accident, when, in fact, her “brother” is actually her boyfriend. They are scamming poor old Anne.

Noeli and her boyfriend scheme and plan for a trip to Paris, while Anne waits for Noeli to return her calls (from the brand new phone she bought her). Feelings intensify as the plot comes together and secrets are revealed through slow, but steady pacing.

What stands out in Sand Dollars, aside from 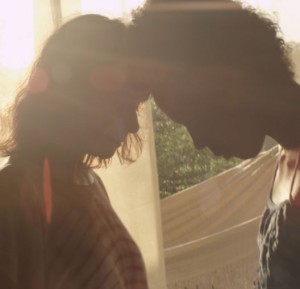 the breathtaking scenery, is Geraldine Chaplin’s performance as love-stricken Anne. While the old woman has her flamboyant male friend and an almost-non-existent relationship with her son, she is left alone on the beach to contemplate her life and the end of her days. You want to reach into the screen and hug Anne, desperately wanting her to move on from Noeli. From her physicality to her worried, tearful eyes, Chaplin is powerful in the role.

Although the characters felt honest and realistic, the age-gap is too bizarre and unsettling to comprehend. The point of the film, explained in the opening minutes, was about unrequited love … but as endearing as Anne is, imagining a 60-year-old woman falling in love with a 17-year-old minor leaves you with an unsettling feeling in the pit of your stomach.

Photos: Geraldine Chaplin as “Anne” and Yanet Mojica as “Noeli”

Most scenes between “Anne” (Geraldine Chaplin) and “Noeli” (Yanet Mojica) pass the Bechdel Test. Although they are a lesbian couple and do not talk about men, their scenes solely revolve around their romantic relationship.