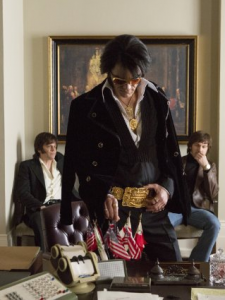 Based on the photo of the December 1970 meeting between Elvis Presley and President Richard Nixon, Elvis & Nixon is a comedic take on the events surrounding this meeting between two of the world’s most notable men of the time. Directed by Liza Johnson, the film is wonderfully acted and perfectly balanced, Johnson blending equal parts comedy and drama with skill. (JEP: 4/5)

To this day the most requested photograph in Archives history is the one capturing Elvis and Nixon’s meeting on December 21, 1970. Until now, the events surrounding the meeting remained a story largely untold. But director Liza Johnson and screenwriters Joey Sagal, Hanala Sagal, and Cary Elwes, breathe new life into an oft-untold story, brilliantly supported by Kevin Spacey as “Nixon” and Michael Shannon as “Elvis.”

When the film opens Elvis has had enough; enough of being told where to spend his money and enough of the state of the increasing drug problem surrounding America’s youth. So in the middle of the night, Elvis flees his Graceland estate and heads to the airport. Brazenly walking up to the awestruck American Airlines ticket agent, “Margaret” (Ashley Benson), and requesting the next flight out to Los Angeles.

Elvis calls upon old friend, “Jerry Schilling” (Alex Pettyfer), who left Elvis’ employ to work behind the scenes at one of Hollywood’s studios. But Jerry cannot say no to Elvis when he calls, and so he agrees to pick him up at the airport in the middle of the night and shuttle Elvis to his mansion in Beverly Hills. Once there, Elvis reveals that his true intention is to go to America’s capital to acquire a Federal badge, and he wants Jerry by his side when he does so.

So the two men leave that night on the redeye, arriving in Washington D.C. in the early morning hours. Their first stop: The White House. Elvis strolls up to th 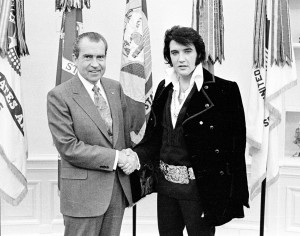 e gate at 6:30am to pass along a letter that he personally wrote to the President. The baffled security ensure Elvis that they will pass his letter along, and so the King goes to his hotel to wait for the phone call inviting him to meet with the President.

When the call doesn’t come immediately, Elvis makes his way to the offices for the Bureau of Narcotics and Dangerous Drugs. Elvis makes his case, expressing his concern for how the country’s drug problem is affecting America’s youth. Although a comical request, Elvis appears quite serious when he announces his need for a Federal badge so he can go undercover to resolve the drug issue.

Meanwhile, his letter makes its way into the hands of two members of the President’s staff, “Egil Krogh” (Colin Hanks) and “Dwight Chapin” (Evan Peters). Egil is an Elvis fan, and does his best to convince the right people that this meeting could be beneficial to the President’s image with America’s citizens.

After his request for a badge is promptly turned down by the Bureau of Narcotics and Dangerous Drugs, Elvis retreats back to his hotel vowing to stay in town as long as is necessary to ensure a meeting with the President. When Elvis begins to lose faith, his men Jerry and “Sonny West” (Johnny Knoxville) may just have an idea to convince the White House staff—and an extremely reluctant Nixon—to the true benefit of such a meeting.

Now, from the real-life photograph, we as an audience know that the meeting happens. But director Liza Johnson artfully captivates her audience throughout with masterful pacing and great comedic moments. When the meeting finally does happen, the audience is rewarded for their patience with an extremely clever, witty, and comical sequence where Shannon and Spacey—Elvis and Nixon—are perfectly matched.

Top Photo: Elvis, with Jerry and Sonny, waiting to meet the President.

Bottom Photo: During the meeting scene, the film recreates the iconic photograph for the screen.

Sadly, although directed by a woman, the film is extremely male dominated, with not a single female character of note.