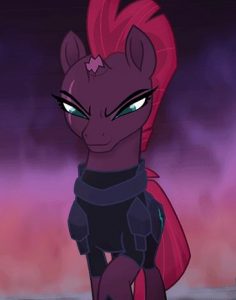 From screenwriters Meghan McCarthy, Rita Hsiao and Michael Vogel comes My Little Pony: The Movie. Though undoubtedly a fun and colorful musical, the beloved franchise is probably better suited to its small-screen format, with long lulls that make its 100 minutes more tedious than enjoyable. (GEP: 3/5)

My Little Pony: The Movie opens in Equestria, a magical and bright land where friendship is magic. Princess Twilight Sparkle (Tara Strong) understands this the most – she is the princess of friendship, duh – but needs a confidence boost from her pals as the Festival of Friendship gets underway, the perfect segue into the encouraging musical number “We Got This.”

But the fun quickly stops when the surprisingly complicated evil network of the Storm King (Liev Schrieber) sends Tempest Shadow (Emily Blunt) to steal all magic from Equestria, where it’s wasted on silly things like friendship. Uh-oh. We don’t got this. 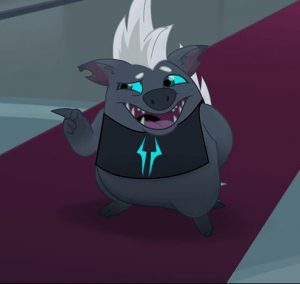 Princess Twilight and her ragtag gang of pony friends (Applejack, Pinkie, Rainbow Dash, etc.) escape Tempest’s evil clutches and leave on a quest to find the Queen of Hippogriffs (Uzo Aduba) for help (we got this again!).

We learn more about Tempest’s broken unicorn horn and the Storm King’s “re-branding” as even more villains (Taye Diggs as Capper) block the ponies’ path. Blunt and Schrieber make being evil pretty funny, but it’s Tempest’s lisping minion sidekick Grubber (Michael Pena) who steals most of the laughs. The ponies of Equestria are goofy characters in their own right – the combination of their unique personalities would make a great sitcom in some alternate psychedelic universe.

Director Jayson Thiessen’s feature is, as the cliche goes, “a little bit of everything” – a little bit sweet, a little bit funny, a little bit good – but it’s not “a lot” of anything, making it a bit disjointed and spastic for adult viewers. Kids who love the TV show (which clocks in at 148 episodes) will be excited to see their favorite characters on the big screen. Equestria and the kingdoms that lie beyond it create an undoubtedly fun little world to enter in small increments, which is probably why the franchise has had such staying power. But the film takes too many turns and its songs, action sequences and jokes grow tired at about the halfway point, giving its sweet message and fun atmosphere much less impact.

With its clunky plot and tedious running time, all that can be said for My Little Pony: The Movie is that it has its moments. Enjoyable songs, plenty of pony puns (the “mane” event) and a sweet story of friends helping each other on a journey definitely aren’t bad, but I think I’m just partial to Paw Patrol.

Middle Photo: Michael Pena’s Grubber is the funniest part of My Little Pony: The Movie.

Q: Does My Little Pony: The Movie pass the Bechdel-Wallace test?

Yes! Princess Twilight Sparkle (best name ever, by the way) and her friends are all unique female leads who work together to save Equestria.