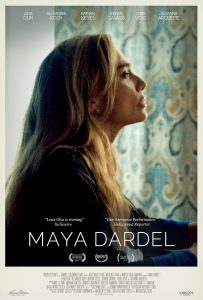 Maya Dardel is an example of a cringe-worthy story so well executed that it, at times, becomes unbearable. Heavily reliant on actor Lena Olin’s performance, co-directors and co-writers Magdalena Zyzak and Zachary Cotler’s creation is a disturbing and nightmarish meditation on reputation, power, loneliness, creativity, and the body of the aging woman. If you manage to stay through the first half, this picture leaves you with abundant food for thought. (MJJ: 3.5/5)

The opening shot of co-directors and co-writers Magdalena Zyzak and Zachary Cotler’s Maya Dardel is a sequence of dreamy close-ups—greenery, lotuses, a lake—then the camera swings around and a stereotypical image of a naked woman standing with water up to her waist and her long blond hair falling down her back becomes visible. However, this time something is different: this female is not a teenager.

The dreamy cinematography with controversial details continues throughout Maya Dardel, and likewise are the light and set design (such as the painting proclaimed to be made of blood and brain matter), and the costuming, exquisite in catching the essence of an aged and solitary poet and writer living in her hillside Napa Valley house. Because, though the beautiful surroundings, “Maya Dardel” (Lena Olin) is plotting to end her life. She calls NPR and announces that her estate will be given to the most suitable and gifted young poet—but women need not apply. Then a series of “interviews” begin, and more and more of Dardel’s abhorring nature reveals itself. 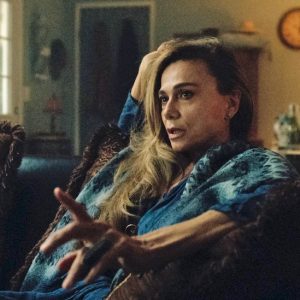 Lena Olin’s performance is outstanding, and completely excruciating. Throughout the first half of the film, Maya’s character and her vocal fry voice (think Kardashians deluxe) are unbearable. There is also a deeply troublesome sex scene that comes off as particularly horrific given contemporary circumstances. But half-way through, the beautiful piano score finally sets in, and as she narrows down her interview process, focusing on the impressionable Ansel (Nathan Keyes), the story becomes more and more humane.

Maya Dardel is a difficult and unusual film in many ways, above all in its centering on a very complex and dislikable female protagonist. It also touches upon multiple intricate questions regarding aging: the body and the desire of the older woman, the slowing mind, ageing solitude and the need to leave some kind of trace behind. Thus, I believe this film resonates with anyone approaching senior citizenship themselves. Maya Dardel probably also resonates with people well-versed in poetry and “high culture.” Unfortunately, neither audience group is known for being very into indie pics. For the rest of us, it is an excellent exercise in exposing ourselves to experiences that are not yet our own, and a practice in trying to understand someone and something unfamiliar. Maya and her “wacky” next-door neighbor (Rosanna Arquette) share some deep conversations, including, but also extending beyond, the topic of men.