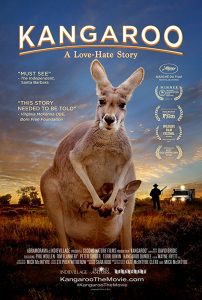 In absolute darkness, a single shot explodes through the night and is immediately followed by a soft thump as another kangaroo hits the ground. A privately hired gunman collects the kangaroo, beheads it and cuts off its limbs, then hangs it from the back of his truck and continues on his nightly job of killing as many roos as he can fit in the car. Deeply disturbing and eye-opening, Kangaroo: A Love-Hate Story, written and directed by Kate McIntyre Clere and Michael McIntyre, is a documentary about the slaughter of Australia’s famous icon and is a must-see. (LMB: 4/5)

Australians can agree on many things, but, it would appear, not on their national icon. To some, the kangaroo is a beloved and cherished wild animal, to others, it’s a pest.

Farmers and some government officials are claiming that the kangaroo population in Australia is nothing short of an epidemic, stating that the number of kangaroos is plaguing the country and ruining the land. Activists and other government officials claim that kangaroo population numbers are at all-time lows, and the culling –or legal killing of kangaroos– is hurting the land, and since the kangaroos aren’t living on farms, they’re out in the wild, it’s inhumane to slaughter them.

The documentary combines footage shot on personal phones and cameras, national coverage on both the epidemic of kangaroos and the slaughter of them as well as countless interviews with government officials, celebrity icons, and countless activists, farmers, and shooters, including a particularly heart-wrenching interview with an ex-shooter who is now an activist for the protection of the roos.

Kate McIntyre Clere and Michael McIntyre have created a stirring documentary that grabs the attention of the audience and is relentless in its mission. From gruesome details of the kangaroo meat and leather industry, to the leaders of Australia begging other countries to ban the import of kangaroo products, Kangaroo: A Love-Hate Story is exactly that, and more.

Top Photo: Terri Irwin with a kangaroo at the zoo.

Middle Photo: The poster from Kangaroo: A Love-Hate Story.

Q: Does Kangaroo: A Love-Hate Story pass the Bechdel-Wallace Test?

There are several interviews conducted between women where they discuss international policy and the welfare of the kangaroo.

Through my time at FF2, I’ve seen a lot of documentaries. Some good, some bad, some that called me to action and got me on the phone with my representatives, and some that put me right to sleep, but Kangaroo: A Love-Hate Story made me want to go home and research if anything I owned contained K-Leather and immediately throw it away.

During the film, Kate McIntyre Clere and Michael McIntyre take the audience through the process of culling and preparing the kangaroo bodies, from bullet to burger, they leave out no detail.

The shooters come in trucks that are equipped to hold around 20 kangaroo bodies. In the dead of night, they drive to the fields and shine lights on the kangaroos grazing on the grass. Once they lock-in on their target, the shooters pull the trigger and aim for the brain, which will, hopefully, result in a kill shot. Unfortunately, the shooters often miss, and hit the animals in the leg, neck, tail, abdomen, or arm, causing it to panic, and desperately run away, only to slowly and painfully die of exposure a few days later.

Which brings another problem to the culling of roos, since the female carries the joey –a young kangaroo—in her pouch, when a shooter kills, or injures, a female, the joey is trapped. Shooters are advised to conservatively use bullets, and therefore don’t kill the joey in an instantaneous shot, and instead, often kill it by ripping it from it’s mothers pouch and either stomp on its skull with the heel of their boot, swing it by the tail and slam it against the back of the truck, or sometimes beat its skull in with an iron rod. The joeys –which sometimes survive these barbaric interactions– are then thrown back into the wild to die and rot. If these images are too much for you to stomach, be warned that the disgusting nature of this industry doesn’t stop there.

Once the roos are killed, the shooters insert a knife at the base of the skull to make sure the animal is dead and remove the head, limbs, and tail before hanging it on the back of their truck, which is open and exposed to the elements. As the shooter continues through the night, the goal is to fill the truck before bringing it to the chiller –a chilled holding area that the bodies are hung in before going to a butcher. It will take several hours to kill that many, leaving the already dead and hung bodies exposed to the heat, bugs, dust, fecal matter and urine, and other gore that the truck may already contain.

Finally, the bodies are transported to be butchered, where the skin is removed and sent to be turned into a type of leather called K-Leather, and the meat is carved up and sold. Originally, the meat was sold for dog and cat food, but more recently the meat has been sold for human consumption and not just in Australia, but around the world. And often tests positive for E-coli and salmonella.

And if you’re thinking that K-Leather would never make its way to America, think again. Top companies, and sports teams have been using K-Leather (think Nike, Adidas, and others).

Kate McIntyre Clere and Michael McIntyre have put together and incredibly powerful documentary, and though it is very long, it is absolutely worth the watch. From powerful interviews, to poignant moments in Australian policy, to gruesome and horrifying photographs and video, Kangaroo: A Love-Hate Story is a fantastic documentary.