Adapted for the screen and directed by Lynne Ramsay, You Were Never Really Here is an exploration of the mind of a man who kills sex traffickers for a living. But without a meaningful narrative, the film becomes monotonous mess even with bullets flying across the screen. (KAC: 2/5) 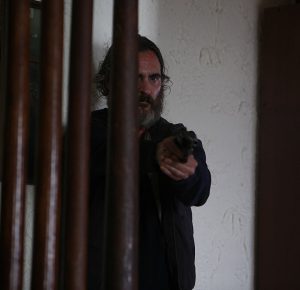 Based on the novel by Jonathan Ames, You Were Never Really Here follows “Joe” (Joaquin Phoenix), a man who hunts missing girls and kills the men who traffic them. The film opens, shrouded in mystery, with Joe cleaning up a hotel room. Is he a serial killer or is he a hero? This question recurs as a consistent theme throughout the film.

Joe is slowly revealed to be a hit man of sorts; he saves teenage girls caught in sex trafficking rings. After he is hired to rescue the daughter of a politician, the job goes awry, but Joe won’t give up without saving the girl. However, the film doesn’t delve into the world of sex trafficking at all, rather it only follows Joe. Somehow, a film about a world in which young women are consistently abused focuses solely on a man’s ability to navigate it, and only has one named female character.

Attempting to reimagine an action movie hero is fine, but this film focuses too much on the male savior in a situation dictated by abuse against women. Joe’s past is revealed through many flashbacks from his childhood and his time as a soldier in one of America’s recent desert wars. Blatantly painted as damaged, we see Joe consistently watching the abuse of others (but we never know anything about who they are apart from their connection to him).

As a child, Joe sees his mother get beaten by his father with a ball-peen hammer (the same weapon he uses throughout the film), and later, as a soldier, he sees a stranger shoot a young girl over a candy bar. But there isn’t a moment in the film where we see Joe subjected to any abuse, except by his own suicidal tendencies. Using violence against women as a plot device for the emotional stability of a male character is despicable.

Furthermore, neither of the two female characters are at all developed. Joe’s elderly mother (Judith Roberts) — who has no name except the implicit “Joe’s mother” — , dressed only in a silk nighty and bra, has only one function: to attempt to understand Joe’s tormented internal psyche. Similarly, “Nina” (Ekaterina Samsonov), the young girl Joe is tasked with saving (also dressed in a silk nighty then slightly upgraded to a lace dress), is also used as a plot device. Both women face horrific abuse in the film, but instead of empathizing with multi-dimensional female characters, we’re supposed to feel sorry for Joe, broken by having to witness it all.

It’s important to note as well that Joe’s mother doesn’t get a name, while multiple men with less screen time and less importance throughout the film are named. Why are women not important enough to this story to even be named? This is also evident in the cast list on the IMDb page for the film, where multiple men are named, but every background female character is called girl, daughter, sister, or mother (with a qualifying adjective), except a few, named for their occupation. There are at least two named male characters who don’t say a word in the entire film. If you’ve already seen the film, scroll down for a more in depth critique of these characters and the gender dynamics at play.

Despite the horrific storyline, the film does succeed in creating something stunning to watch. The cinematography and production design create a stream of beautiful images, while the sound mixing and original score pull you into the world of Joe’s ‘heroism’. These elements make the film watchable, but sadly don’t make up for the failure of the story and characters.

Lynne Ramsay’s You Were Never Really Here disappoints. Her film constructs a fantastical male-centered world that is unimaginative and ultimately boring. Somehow, despite the constant heart-pumping violence, this film falls flat and lacks excitement.

Q: Does You Were Never Really Here pass the Bechdel-Wallace Test?

This film doesn’t even come close to passing this test. There are only two female characters, who never interact with one another and are both used as plot devices in the male character’s story.

The characters in the film are disappointing. Joe is developed by witnessing the abuse of women and the women get no storyline.

The film follows him as a hero saving pre-teen girls from sex trafficking, but really he’s in it to hurt people, in the same manner that his father beat his mother. Joe represents the quintessential male abuser, yet this film presents him as a damaged hero. You Were Never Really Here admits Joe isn’t perfect, but we are still supposed to empathize with him for what he’s witnessed. This comes through the form of repeated flashbacks rarely providing new information.

Joe also suffers from suicidal thoughts, but instead of putting us in his skin, where we could understand his state of mind and see why he feels this way, his thoughts are used for shock value. The most obvious moment is when he shoots himself in the diner at the end of the film, only for the reveal that it was just his imagination. His suicidal thoughts aren’t taken seriously and give the audience no insight into who he is. They are used as no more than a type of jump scare or as a moment of suspense — will he or won’t he?

The female characters are far worse off than Joe. Not only are they constantly abused, for the sake of Joe’s storyline no less, they are also consistently sexualized and are massively underdeveloped.

Let’s start with Joe’s mother. Like I stated above, she is unnamed (already a huge gap in her character). Seemingly worse, she’s seen as a crazy old lady, although it’s unclear whether or not she has dementia. She cannot live without her son and exists as a burden to him. Furthermore, her story is unable to be explored because she has so little screen time before being killed. It seems like she spends more time on screen as a dead body than as a living person.

The second, and only other, female character is Nina. Her age is unclear, although she appears to be between 11 and 15. She is seen throughout most of the film in a silk nighty or a lace dress, clothing clearly made for an adult. While the setting of a sex ring justifies the costume choice, it doesn’t justify why she never changes clothes and why no one ever questions that Joe is walking around with and sometimes carrying a young girl in a silk nighty. The film would be much more plausible if she changed into almost anything else. Her costumes exist to sexualize her but, even after Joe saves her, she remains a sex object.

More ridiculous is Nina’s lack of character development and the entire sequence in the Governor’s mansion. Joe barges in, killing every security guard until he gets to the room in which she was being held. The rampage ends with him finding the governor with his throat slit at the foot of a massive pink bed and Nina nowhere to be found. Joe proceeds to have a break down, seemingly because he didn’t get to kill the ‘ultimate bad guy’. He then walks into a large dining room where Nina sits, with a minimal amount of blood on her (almost too little to believe) in her white, lace dress. She’s eating dinner, probably in shock from having just killed someone.

Joe walks over and kneels next to her. He begins to cry and she turns to comfort him. This moment epitomizes the film. Women, after facing abuse, comfort a man upset that he can’t abuse someone. It’s also massively unclear if this moment is supposed to be the climax. Nina is rescued (by herself), although Joe then — in very typical hero fashion — carries her out of the building on his back. It’s hard to care at this point.

One of the most blatant ways that the film exposes its hatred of women is through the violence. Abuse against women is directly shown on screen, while any against men isn’t. Cutaways block us from seeing Angel get shot and framing blocks us from seeing the torture than John McLeary (Joe’s boss) endured. However, we see Joe’s mother beaten by Joe’s father and later when she is killed, Joe lifts the pillow for us all to see her dead, bloody face. Even the view of dead background characters exposes this pattern. We see every face of the dead women in the shipping container, while we never see a single face of any of the security guards that Joe kills. The film wants us to see women attacked and bloodied, but shields us from seeing men in the same way.

There are only two instances where we see men hurt, one of the assassins that killed Joe’s mother and Joe, himself. But neither are viewed in the same way as the women. We are forced to sympathize with the assassin because Joe does. They hold hands as he tragically passes away. We see that it’s not his fault that he’s in this situation, even though it’s likely he just killed Joe’s mother. The dying assassin gets more of an emotional arc than Joe’s mother’s death. Violence that Joe commits against himself is also viewed differently, because he never suffers. His constant suicide attempts are either fantasies or he walks away with no consequence.

Ultimately, this film is a disappointment that doesn’t make sense within its own constructions.