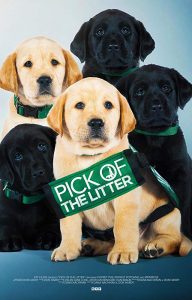 Following the birth of five puppies at Guide Dogs for the Blind, Pick of the Litter follows their journey to becoming a blind or visually impaired person’s guide for life. The documentary—co-directed by Don Hardy Jr & Dana Nachman with a screenplay by Nachman—explores this difficult path, but fails to look deeper than the numerous tests the puppies must pass before becoming guide dogs. (KC: 3.5/5)

Pick of the Litter pushes the viewer into the world of guide dogs. Proving that it is not an easy task to raise, or to be, a guide dog, the film follows five dogs from birth through their journey with Guide Dogs for the Blind. The film follows each dog as it moves from the home campus to a raiser’s home and then back to campus to complete training.

The film begins with a delicate scene of the birth of five puppies in the ‘P’ group: Patriot, Potomac, Poppett, Primrose, and Phil. Even from birth, the dogs are carefully inspected and watched for any signs of ineligibility. Their first steps are scrutinized—are they curious enough? Are they too anxious? Each action they take can qualify or disqualify them from becoming guide dogs.

When the dogs leave the home campus, they are placed with individual puppy raisers (volunteers that train the dogs from about two months to about fifteen months old). As each person or each family that takes in one of the five puppies is introduced, the personal nature of the job is revealed. That is, until the dog is quickly ripped away from a raiser who isn’t doing it right. A few of these situations are shown in the film, including one scene with a high-school aged boy.

The organization cares little for the emotions of the raisers, instead focusing on raising as many guide dogs as possible. The film, however, peppers in relationships between the dogs, their raisers, and their potential partners. It explores the difficulties and benefits of the guide dog program’s unreliable placements. Patriot is consistently moved back and forth between raisers and eventually fails to become a guide dog, returning to one of his raisers. The moment of their reunion was quite heartwarming, yet still a reminder that the dog’s emotions and needs have little impact on the process.

Even so, very few dogs actually become guide dogs—only about 300 of every 800 puppies become working guide dogs. Otherwise, they become breeders (giving birth to more puppies), or they are “career-changed” (a nice way of saying they aren’t good enough to be guide dogs). The film does show that the dogs can gain interest from other agencies like Dogs4Diabetics if they are career-changed, or they can become someone’s pet.

While this documentary does thoroughly explore the path of dogs through guide dog training, it doesn’t do much to follow the many questions raised by emotional situations that arise. What happens to the breeders after they give birth? How do the dogs breed? Why are all the dogs purebred? States like California are beginning to outlaw puppy farms that only breed purebred dogs. How does Guide Dogs for the Blind ensure that the breeders are treated well, and that the puppies aren’t inheriting negative traits?

How are raisers chosen? In the film, there are many raisers, some first-timers and some who’ve raised up to ten previous puppies, but what are the criteria for the raisers, especially when some have had no previous success? It’s clear that Guide Dogs for the Blind has no problem separating dogs from raisers, but with such a low success rate, have they thought about being more selective in choosing who raises the puppies?

Most importantly, the film fails to answer the question: where does all the money for these dogs come from? Purebred dogs and breeding purebred dogs are expensive. The inner workings of the charity are not explored at all in the film, despite the film serving as promotional material for this one non-profit. Why this non-profit and why not explore whether this non-profit is truly benefiting all people?

Obviously dogs are cute and this film capitalizes on that tremendously. It also works to provide some insight about the difficult training dogs go through to become a guide dog. Sadly what it misses are the many human aspects of the process. Its surface level scenes of dogs and owners don’t provide the necessary deep dive into whether this is the best way to raise guide dogs and whether this is the best charity to donate to. 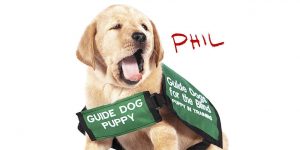 Top Photo: One of the dogs rides the bus, a tricky task to stay focused and calm.

Middle Photo: A poster for the film.

Bottom Photo: A poster for Phil, one of the five puppies.

Q: Does Pick of the Litter pass the Bechdel-Wallace Test?

Although all conversations are shown “on the go,” Pick of the Litter contains many women who talk about the fates of the dogs as well as their own experiences as Guide Dogs for the Blind employees, volunteer Puppy Trainers (at multiple stages), and lucky recipients. In fact, from beginning to end, there are probably more women in this film than men.

Also, for the record, two of the five puppies are female, as is their mother (of course) and they certainly “converse” in their own way 😉