The Mustang frontlines American inmate Roman Coleman as he struggles to overcome his temper so he can remain eligible for the outdoors rehabilitation program at his prison. Here he must put aside his own demons and learn what it means to be patient in order to tame an unbreakable stallion. (AG: 3.5/5 stars) 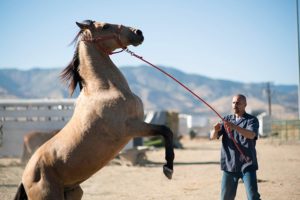 The Mustang, directed by Laure de Clermont-Tonnerre, is an emotionally taxing yet gorgeous film that follows inmate Roman Coleman, played by Matthias Schoenaerts, as he begins an outdoor maintenance program in his prison. Roman begins his journey with the inglorious job of shoveling the horse feces left from the prison’s wild horse training program. Here he has his first encounter with a disobedient stallion when he sees it bucking and kicking at the door of its stable. He ventures too close to the horse, which attracts the attention of training veteran Myles, played by Bruce Dern. Myles sees potential in Roman and pushes him into the program, where Roman must attempt to train the wild animal under the guidance of plucky show rider and fellow inmate Henry, played by Jason Mitchell. As Roman learns to control the horse, he in turn begins to work through his own emotions regarding his past, and comes to the realization that he must be a better father to his abandoned 17-year-old daughter.

Before I get too far into a dissection of the film, I wanted to quickly mention the work of Ruben Impens, the cinematographer. Everyone who watched the film with me was astounded by the breathtaking visuals. From the sprawling landscapes to the shots of Roman sitting in his cell, there wasn’t a single frame that wasn’t intimately beautiful. Each shot was composed carefully enough to capture the action without many cutaways, which kept us all locked into the headspace of Roman. It would truly be worthwhile to see this film for the cinematography alone. 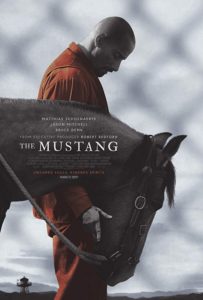 That being said, the absolute highlight of this film was the performance of Matthias Schoenaerts as Roman. Schoenaerts navigates the character of the reserved and calculating inmate in a way that is singularly enthralling. So often characterizations of extremely guarded people come across in films as boring, as we have little to attach our own feelings to. However, in this case, Schoenaerts crafts Roman through body language and facial expressions that command our attention. He doesn’t need much dialogue to become a character that we root for and emphasize with. Because of this, the few key moments where Schoenaert breaks his stoicism hurt so much more deeply.

Laure de Clermont-Tonnerre wrote the script for the film, along with Mona Fastvold and Brock Norman Brock. While the script itself lays a solid framework, it’s not here that the film really shines. The plot is highly formulaic and trope-driven, to the detriment of the story. Myles fulfills the stereotype of the borderline abusive coach who covers up his naturally kind and giving personality. Henry, too, fulfills the trope of the amusing and soft-hearted Black mentor. The script relies on these tropes to tell the story rather than spending the time to round out these characters. Upon meeting them we already immediately know who they are and how they think, as they are all stories and perspectives that we’ve seen a million times before in media.

An example of this is the relationship between Roman and his daughter, Martha, played by Gideon Adlon, as it is sparse and deserving of more context than it’s given. Martha is a fierce and powerful character in her own right, so why does she keep giving her father, who is consistently mean to her in addition to having a history of domestic violence, more chances than he deserves? It’s understandable that a kid in her position would desperately want a relationship with her parent, but instead of addressing this head-on, the film asks us to infer this on our own.

This brings us into the largest question of the film, which is that is asks us to emphasize with a domestic abuser. I’m unsure if, in this political climate, we need more films that ask us to feel for white male abusers, no matter how much internal change they go through. I understand where Clermont-Tonnerre is coming from by showing us that even the worst people can change and learn control if they put in the effort, and I think that the way she crafts such change is beautiful and enthralling. Even so, it’s tiring to see Roman being so consistently rewarded after each outburst of anger.

Director Laure de Clermont-Tonnerre carries us through the story of a changing inmate in The Mustang with a delicacy and grace that is rare to see. Despite its problems, it’s not a film that I’ll be forgetting anytime soon. 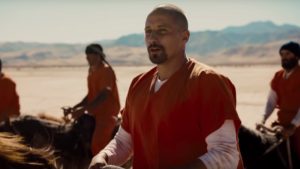 Q: Does The Mustang pass the Bechdel-Wallace Test?

As this film is set in a men’s prison there are no scenes where two women are shown together.