Budding director Dr. Lillian Glass reveals a moving portrait of her mother’s life in the new documentary Reinventing Rosalee. The story follows Rosalee through various stages of her life, from her escape from WWII Germany to her time spent in Soviet prisoner-of-war camps to rebuilding her life in the United States. (AG: 3.5/5)

Reinventing Rosalee serves as a heartfelt love letter to Rosalee Glass from her daughter and director of the film, Dr. Lillian Glass. The film opens on Rosalee discussing her life as a Jewish woman hiding from the Nazis in WWII Germany. From here she describes her journey to the Soviet Union, where she was captured by the Red Army and forced into prisoner-of-war reconstruction camps. These hard truths are symbolized through a compilation of old hollywood black-and-white footage mixed with stock footage until Rosalee is able to flee the Soviet Union and we see an explosion of color as she begins her new life in the United States.

The honesty that both Rosalee and Lillian Glass, but Rosalee in particular, showed in this documentary is astounding. So many moments of Rosalee’s life were utterly heartbreaking and hard to sit through, even as a viewer. With her strength she serves as a reminder that there is life waiting on the other side of hardship. Of course, having a rich daughter who enjoys taking you on vacations across the world helps (after postdoctoral training at UCLA she has used her skills in behavioral analysis to write a multitude of self help books, and has also been employed by celebrities as an acting coach), but even so, Rosalee proves that you can live your life to the fullest no matter where your feet land. 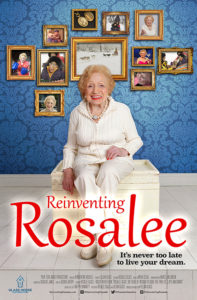 Perhaps the best part of Reinventing Rosalee is seeing all that Rosalee has been up to in her time in the United States—and she’s been up to a lot! Rosalee is not a woman who turns down a challenge, whether that means competing in a senior beauty pagent, travelling the world, or sledding with Alaskan huskies at one hundred years old, she simply cannot say no once she sets a goal in her mind. Dr. Glass certainly knows that her mother is a force to be reckoned with and indulges in sharing her amazing life with us.

The only drawback of the documentary is its somewhat amateur formatting. Some of the shots feel unnatural and the use of stock footage is at times excessive. Also, during the earlier portion of the film which outlined Rosalee’s time in Nazi-occupied Germany and as a prisoner of war in Siberia and Kazakhstan, I wish more time had been spent breaking down the specific history of the region, so that I could walk away with a clearer image as a viewer. Nevertheless, the film sparked a desire in me to delve more into the history of the Jewish people who escaped to the Soviet Union.

In some ways, however, these flaws aided in the film’s storytelling. By allowing her personal feelings for her mother to shine through in the documentary, Dr. Glass gives us the opportunity to fall in love with Rosalee in the same way that she has. Through this, every achievement that Rosalee accomplishes feels that much more special and exciting, and every hurdle she faces hurts that much more. The intimate nature of Rosalee’s stories combined with an assortment of Polaroid images and VHS footage had me leaving the theater feeling as if the Glass family were people that I knew.

All-in-all, Dr. Lillian Glass provides a touching and honest depiction of an incredible woman. Though some aspects of its production border on the amateur, this film stills holds its own as a praiseworthy portrait. 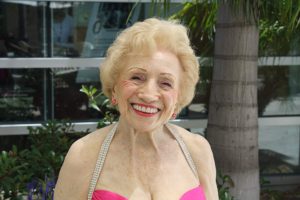 Rosalee spends a large portion of the documentary detailing her life and speaking to her daughter.