Hail Satan?, directed by Penny Lane, is a documentary centering on Satanism and The Satanic Temple, a movement focused on upholding religious liberty, bodily autonomy, and free expression. (BV 4.0/5.0) 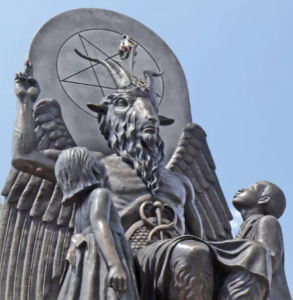 Compiling a series of interviews, protest displays and archival footage, Hail Satan? focuses on  The Satanic Temple figure-headed by “Lucien Greaves”, a practicing Satanist. The Satanic Temple (TST) is a nontheistic political and religious activist group, and contrary to popular belief does not worship Satan as a God, but has him serve as their icon for rebellion. The film follows the group’s various activities, social advocacies, and its history — from the “pink mass” protesting Westboro Baptist Church’s homophobia by having LGBT members kiss on the leader’s mother’s grave, to a performance art protesting abortion in which adults dressed as human fetuses.

Unsettling yet morbidly hilarious, dark humor is woven into Satanism as if second nature, but the unexpected movement tackles persisting issues of the separation of church vs. state. One of the most prevalent sections in the film is the controversy of having a “Ten Commandments” Statue displayed on state ground in Arkansas. TST commissions a baphomet to combat this, as the group believes that all religions should be displayed equally. Their goal is not to ultimately put up the statue, but to have the “Ten Commandments” taken down. The group believes that the country is rampant in “Christian privilege”. Though there are some extremist views in the faction, Hail Satan? is a nuanced, thought-provoking film that sheds “devil-worshipping” into a more sympathetic light.

Overall, the Director Penny Lane’s documentary is incredibly fun to watch because of the seemingly ridiculous subject matter. The sarcastic spokesman Lucien Greaves is charismatic and witty, making him a entertaining “main character” to follow. His blunt sarcasm delivers unexpected punchlines, and despite his casual, rebellious attire, he’s well-educated (Harvard, where TST wanted to perform their “black mass”, is his alma mater) and articulates the Temple’s cause passionately. He even dismisses extremist views of one of the founding members, showing how seriously he takes Satanism’s tenets, serving as the wry face for a group of misfits advocating for social justice.

The most compelling component of the film, however, is Penny Lane’s story direction. Lane plays into people’s initial impressions about Satanism, that it’s a satirical ideology parodying extremist religions. It opens with the more ridiculous feats that Satanists have done, such as the “pink mass” against the Westboro Baptist church and the Rick Scott protest. However, as the movement gains more traction and legitimacy, the documentary starts taking on a more serious tone, as if mimicking the religion’s journey from an elaborate prank to a more “traditionalized” temple. If Hail Satan? had taken on its serious tone right away, I don’t think the storytelling would be nearly as effective. Satanism is intimidating for the average joe, with its horroresque visuals and graphic subject matter, so the topic’s gradual development made it easier to sympathize with the movement.

An opportunity for sympathy is the segment where someone asks, “isn’t satanism basically just atheism?”— in response, Satanists reply that “atheism is boring” and that they want a sense of community. Despite its morbid reputation, Satanism’s core values revolve around empathy, and the many scenes showing TST’s charity work and group meetings helps emphasize their values. Their actions are something most people would never expect from people exhibiting edgy attire.

Nonetheless, Hail Stan? has its shortcomings. It only really touches upon extremist christians and their opposition, failing to bring in views of 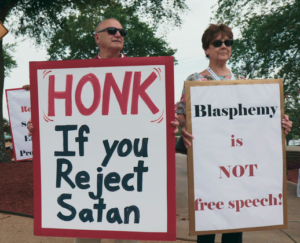 other religions and casual churchgoers. As Lane became a member of TST herself, omitting other opinions may have been a choice in order to “sell” the movement and and get more people interested—the film has an obvious bias and clear enemy. It would have felt less propagandistic if the film included more diverse viewpoints,  from religions where Satan isn’t such a prominent figure like Hinduism, Buddhism, and native beliefs that were only mentioned in passing.

However, the ultimate goal of the film seems to be to garner more interest towards the Satanist movement, and dispel common misconceptions, which it does so splendidly. It’s a documentary full of wit and charm despite the dark matter, and I was surprised at how much I enjoyed it. Maybe you won’t necessarily be converted, but Hail Satan? definitely at least got me interested and further reminds not judge a book by its cover.

Hail Satan? is such an enjoyable documentary to watch! I went in with the same apprehension as an average moviegoer would have, and the beginning of the film definitely played into that. It is as though Director Penny Lane knew what I was thinking when she started the film with phone-recorded interviews and footage that almost mocked the entire subject. But wow did she change my mind. As Bea rightly points out, the direction of the documentary is guided in a very smart way. It subtly changes from a mockery to a serious discussion about religious equality. Lucien Greaves is a very interesting character to follow. His honesty is refreshing and definitely aids in legitimizing the topic. However, Bea and I both wished to also hear the opinions of those from other religions.

Prior to this documentary, I did not know much about Satanism; not only did this film educate me about the TST community, it also alerted me to the issues of equality in a way I hadn’t thought of before. Recommend this fun documentary to all! (KIZJ: 4 / 5) 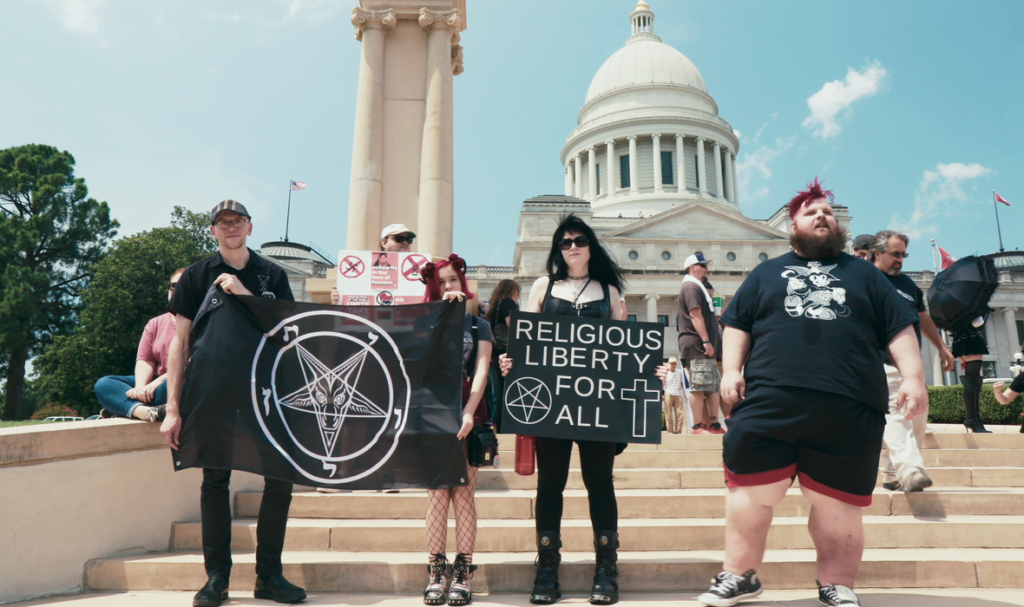 I’d say it does, as the female director asks questions to some of the female members of the Satanic Temple.