Transported down the river in ceremonial canoe, inexperienced and baby-faced May (Nguyễn Phương Trà My) becomes the third wife of Hung (Vũ Long), a wealthy landowner, to pay off her father’s debt. During her wedding night, per tradition, Hung cracks an egg on her untouched body and sucks it out of her bellybutton in hopes of conception. Though the women of the family are its staples, taking care of the ailing patriarch and most household duties, they can only fully display agency if they have a son. First wife Ha (Trần Nữ Yên Khê) is the head of the household with Son (Nguyen Thanh Tam), the sole male heir, while second wife Xuan (Mai Thu Hường), the “more alluring” wife, has only had daughters.

Soon, May becomes pregnant, and slowly begins to understand the hierarchy in place. Thus, she prays desperately for a son to move up in the social ladder and earn Hung’s favor. However, with May’s prayers, consequences are laid bare and heavy secrets revealed as the end of her pregnancy nears, especially when Son is sent his own child-bride though he is in love with someone else. The Third Wife is a subtly nuanced film detailing the sacrifices and oppression young girls face at the hands of their patriarchs.

Critically exploring gender roles in history is a popular subject in Asian cinema, where many societies adhere to the belief that sons are better than daughters, as family businesses are inherited by sons. Though the film doesn’t hold a steady plot, it manages to be powerful in its own right, filled with natural metaphors and quiet drama. Despite men being at the top of the hierarchy, Hung is barely present, Son weak-willed, and males are barely shown— but the repercussions are severe, and the women must pay for men’s mistakes. Coupled with such complex topics, The Third Wife’s cinematography is also nothing short of gorgeous, showcasing the natural wonders of Vietnam— all these factors put together make Mayfair’s directorial debut incredibly ambitious.

Something in particular that I enjoyed is how The Third Wife manages to be a sensual film without objectifying women’s bodies. The elder wives are not afraid to share their sexual wisdom with May, and are depicted enjoying sex (especially Xuan). Though Xuan is the more promiscuous wife, unabashed in her prowess, there are no scenes ogling her nor any service that particularly strikes the male gaze. It’s obvious that this film was directed by a woman, because the women are allowed to be sexual while also being multifaceted humans. There is also no petty cat-fight or obvious conflict between the wives; they learn to co-exist and even support each other, though some tension emits from Ha as the authoritative head. Ha, though easily able to be portrayed as a malicious first wife, is a stern but kind figure who has suffered the pains and tragedies of pregnancy, and is the one to save May in her time of need.

The Third Wife is a critique against the oppressive forces of the patriarchy, yet also one where women are the main agents. Nothing particularly “action-worthy” happens, but each scene is evocative and overflowing with metaphor. Mayfair’s debut is a film that’ll awe the viewer with how gorgeous it is— and also keep them thinking for a long time. 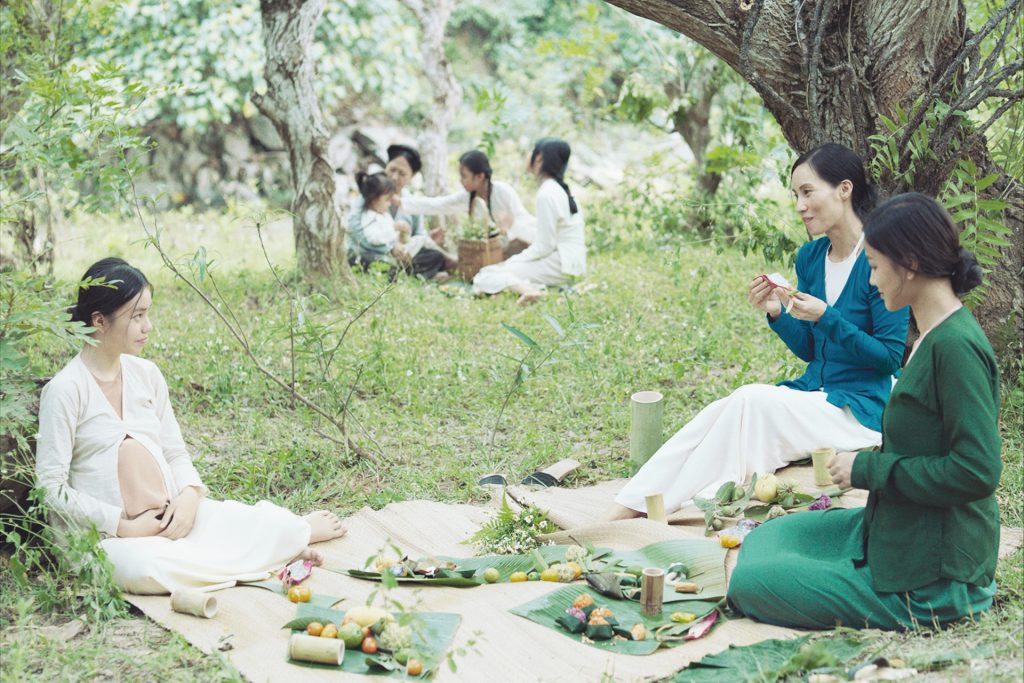 Photos: Nguyễn Phương Trà My as May in The Third Wife; the three wives May, Ha (Trần Nữ Yên Khê) and Xuan (Mai Thu Hường) with Xuan’s daughters in the background

I thought The Third Wife’s setting on a farm was one of the most poetic parts about it, since the daily issues of livestock and resources are a potent metaphor for the management of population and social mores that patriarchal power represents in this film. When animals are culled and bred on the farm, it calls to mind the way the wives are being used as another kind of livestock. It’s especially interesting since the wives themselves are often the ones who do the killing and breeding of the animals; this brings up another of the more morally complicated aspects of The Third Wife: the complicity of upper class women in power structures.

While the wives in one sense have very little power in their world, they exercise the power they are given in sometimes vicious ways to maintain their own status and the systems that give them that status. They tellingly also uphold the structures that give their husband status so they can continue benefiting from his status as part of his household/ property. We see a peasant couple who are pregnant out of wedlock being whipped in the village, and the wives do little more than shrug at this; it is accepted by them that this is the punishment for daring to have a baby without permission. If two animals had mated against Hung’s wishes, it would have been dealt with in the same impersonal, dehumanizing manner and the wives would have had the same non-reaction.

The Third Wife has an analysis of power structures that don’t leave anyone exempt from its scrutiny. Everyone is a morally complicated actor in this strictly regulated social hierarchy. The film is all the more relevant for its being about the deepest sexual and social anxieties in our own society. All in all, a chilling and deeply necessary film.

Does The Third Wife pass the Bechdel-Wallace test?

Yes— the main characters are all female, and do talk about things other than their husband, like household chores and duties.