Mouthpiece is a graceful deep dive into the first 48 hours after a young woman loses her mother. Surreally formed, it is an expression of loss and grief through the love and life of one complicated woman. (HRM: 4/5) 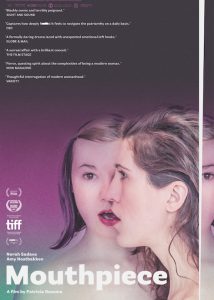 “Cassandra,” a 30 year old writer living in Toronto, wakes up one morning to the news that her mother passed away the night before. She is immediately bombarded with funeral preparations and waves of emotions and memories from her time with her mother, creating an inner turmoil. Her internal and external state is communicated through two actresses, Norah Sadava and Amy Nostbakken, who often break into song and dance and move in tandem, but who the outside world only ever acknowledges as one person.

Mouthpiece plays out over the two days leading up to the funeral, and follows Cassandra as she prepares food and flowers and a speech for the funeral. Every corner she turns awakens a memory of her mother “Elaine” (Maev Beaty). Her father “Chris” (Ari Cohen) and “Aunt Jane” (Paula Boudreau) want her brother “Danny” (Jake Epstein) to do the eulogy because of an incident between Cassandra and her mother at a Christmas party the week before, but she insists that she be the one to do it. Aunt Jane keeps calling with more things to be done by the funeral. Things keep piling on top of Cassandra and her grief, and the viewer gets to experience it through the two poles of her personality. 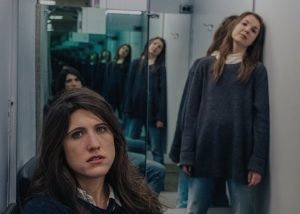 Adapted from a 2015 play that was written and performed by the two women who play Cassandra in the film, Norah Sadava and Amy Nostbakken, director Patricia Rozema does a superb job translating Mouthpiece’s story to the medium of film. It maintains a theatrical spirit, largely through its song and dance numbers, while communicating the deeply emotional story with grace and intention in all cinematic parts.

From the first scene the cinematography that is used creates a surreal world, almost to the point of magical realism. The colors, light flares, and expressive lighting and framing, while stylized, all have a home in the world of the film, which is to a great extent told through memory and dream sequences. Cassandra’s two human expressions are hugely supported by the camera as well, which often distorts her image as a reflection of her personality.

Mouthpiece is well crafted in all its parts, leading to a heart wrenching ending and overall moving film. The story is beautifully written and told, a profound and honest expression of a deep loss and grief.

Yes! Even if you don’t count the fact that the main character is split into two people, I don’t think there is a single conversation with two women talking about a boy for the entire film.