An interweaving of the past and the present, Karen Kramer’s documentary invokes the voices of the Beat generation to paint a picture of today’s atmosphere of political activism through poetry and song. While its heart is in the right place, Renegade Dreamers lacks the substance needed to make for an inspirational yet informative documentary, leaving us with slivers of content spliced together that, ultimately, don’t inform us about much. (RMM: 2.5/5)

Renegade Dreamers opens with a montage of photos and videos of the most prominent poets and musicians of the Beat Generation such as Jack Kerouac, Allen Ginsberg, and Bob Dylan. A narrator reminds the audience that these were revolutionaries of their time who fought corruption and conformity in society. In the present day, the audience becomes acquainted with four musicians and poets who have chosen to follow in those revolutionaries’ footsteps.

Artists Matt, Roya, Tiffani, and Jeremy have made the streets of New York City their battleground. Matt believes in putting protest into poetry and music and stresses the importance of using both as tools to discuss what’s going on in the world today. Bronx native and the youngest of eight children, Roya champions spoken word poetry as a powerful way to spark change. Wielding a guitar like Matt, Tiffani spreads her words of rebellion on street corners and public protests and rallies, identifying herself as both an artist and an activist. Finally, Jeremy “Germ” prefers the medium of radical poetry and believes in backing performance with passion. 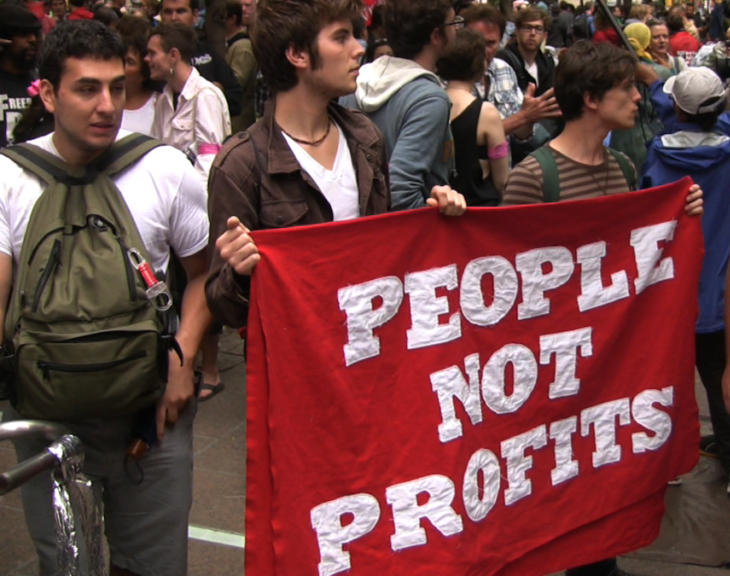 The narratives of these four artists are supplemented with reflections from living members of the 1950s’ Beat Generation – such as poet Hettie Jones and musician David Amram – on what it was like to be a part of the counterculture of the time. Photos and videos of performances at the now-famous Greenwich Village’s Gaslight Cafe pepper this documentary in an effort to make the audience view today’s revolutionaries through the lense of those famous Beats. Back then, artists openly challenged the era’s ideas of conformity in society and criticising phenomena like McCarthyism. In modern-day New York, our four protagonists cite issues such as police brutality and active protests such as Occupy Wall Street as the centers of open discussion that challenge that same conformity.

While its message of words sparking discussion and change rings clear, its veneer of rebellion and non-conformity through poetry does not shine bright enough to cover what this documentary lacks: substance. Though Renegade Dreamers champions spoken word, among other things, as catalysts for change, it fails at actually demonstrating what spoken word can look and sound like and what it can do. This documentary dedicates screen time to spoken word poets and musicians from both the past and the present. Its interviewees repeat over and over how powerful words are, what they can shed light on, what change they can bring about. Why don’t we see exactly what it can do? Having lived in New York City’s artistic scene for the past four years, I can say firmly that there is no shortage of wonderful content being produced and performed today from people of all backgrounds. The small slivers of performances that Renegade Dreamers features are so brief that I barely have the chance to get a feel for what messages they convey.

On a similar note, director Karen Kramer touches a great deal on the Beats without actually telling us much about them. While one could argue that Kramer prefers to keep the focus on the voices of today’s artists, this argument fails because neither generation is actually given space to use those voices. If the film wanted to educate us on the Beat Generation, Occupy Wall Street, and other protests, rebellions, and countercultural movements, it fails to deliver more than short video montages and vague commentary. With these subjects insufficiently covered, I assume that the audience is expected to already know about these topics. If so, the film immediately makes itself less accessible to those who are not well-versed on this history.

Likewise, if Kramer wanted to show us what the current generation of artists in rebellion are doing, she just missed the mark. These four artists do not feel relatable. Their lack of diversity, save Roya, goes without saying. But what bothers me more is their constant, verbal insistence that they are the rebels of today. Would a rebel need to say that she’s a rebel? Most people given interview space are white and come from middle class backgrounds which they chose to leave for homelessness. That’s fine, but it says nothing about those who face far worse problems. There are so many other communities of queer people, minorities, women, who still fight for basic rights. I don’t accuse those artists featured as not having any of these problems but I wish the film would have addressed these obstacles. Furthermore, invoking the images and voices of Beats like Jack Kerouac and Bob Dylan only reminds me how only the white men seem to be remembered as the revolutionaries of their generation. These are remarkable literary and social figures, but they have had enough attention in the media and in the classroom. Where are the forgotten voices of their time? Of today?

Overall, I do appreciate Kramer’s message. Art has always been instrumental in sparking change and facilitating dialogue about issues of the day. But I would have liked to see more substance behind that message.

While women are interviewed, there is no conversation featured specifically between women about women.