Serendipity documents life from Prune Nourry’s point of view; the French artist directed the film as she was coming to terms with her breast cancer diagnosis. Nourry films in a personal, first person perspective, letting us see her private spaces and the inside of her mind. She uses the film as a way to fully immerse the viewer in her world. The film is a successful and deep look into her reality. Her documentary is touching, humanistic, and flows together seamlessly.  (CPG 4/5) 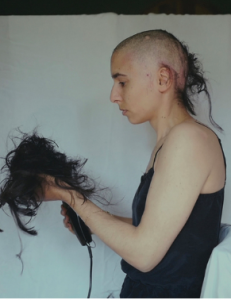 Nourry brings the viewer on her journey with cancer, starting from the very beginning. Her film bridges the clinical side of her life with the emotional and artistic, encompassing Nourry fully as the multifaceted human she is. First person shots of medical procedures, and intimate musings as Nourry sits comfortably are juxtaposed with each other, yet makes perfect sense because it has become her reality.

When ones body is being attacked by disease, it makes you question and explore the difference between yourself and your physical body.  As a doctor harvests Nourry’s eggs to be frozen before she is set to undergo chemotherapy, the film cuts to her braiding her long, thick hair. Nourry reccounts how she has done her hair this way every morning for years and years. She then takes a pair of scissors, and nervously lets go of a part of herself.

Nourry’s filming technique makes it possible to capture her life in a realistic way. You feel as if you are in the room with her, as the film is done with a homemade, shaky touch. There is a unique quality to Nourry’s energy, something striking in her fresh-faced, relaxed demeanor. She intrigues the viewer immediately, being vulnerable with the camera, discussing her fears and deep thoughts.

The documentary follows Nourry on several large and impressive artistic endeavors across the globe. Focusing on the female body in all pieces, Nourry incorporates how each culture views women’s anatomy. She compares girls in India to the sacred cow. Nourry comments that no one wants to have a girl when bearing children, yet they worship the cow which represents fertility. Nourry’s striking sculptures of part-cow-part-girl creatures are incredibly powerful. While her commenting on other cultures sometimes feels a bit off, her intentions in the film seem to be to explore “the female” in as many ways as she can through her art. 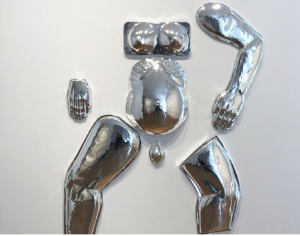 Serendipity is a successful documentary in that it brings the viewer into Nourry’s mind and world. Much of the film is silent, letting her art and cinematography speak for itself. There were times I wish we got to hear even more from Nourry verbally, because it is so beautiful when she decides to and parts of the movie seemed to drag a bit. However, the lack of constant narration gives you time to breathe and process the art you are seeing.

Nourry’s belief that everything in this world is connected is a good way to describe the feeling of the film. It flows seamlessly, jumping throughout Nourry’s timeline and projects. Serendipity is an overall beautiful film with gorgeous shots of landscapes all over the world and many emotional, deep cutting moments.

I recommend Serendipity highly, especially for anyone interested in how the universality of humanity prevails through art in devastating times.

Q: Does it pass the Bechdel-Wallace Test?

Yes! Made by a woman and focusing on a woman and her journey, the film does not ever even mention Nourry’s relationship to men.

I mostly had critiques about the art Nourry shows in this film rather than the film itself. She shows a “fertility banquet” that she threw as a piece of performance art where the dessert is shaped like fetuses; she did what appears to be basically a food truck version of this piece by pretending to sell sperm to people in to-go test tubes. Like in most of my studio classes at art school, I wondered what exactly the point of these pieces was. I was also kind of weirded out by how she felt like she could just waltz over to India and make a bunch of cow statues to tell people about their own culture’s misogyny problems. She even went to China and did this same problematic thing again, this time doing a play on the terra cotta warriors with statues of young girls in place of the soldiers. While this isn’t exactly what the film is about, Nourry did make a choice to show us her cancer treatment through the lens of her past art pieces, so I view it as fair game.

Despite the problematic art she sometimes features, Nourry definitely put together an articulate film about grief and mortality with the clips of her art pieces over the years. Nourry’s stated reason for showing her art pieces in this film was that her work has always been fascinated with the body. The body is certainly featured in both the art she shows and the shots she chooses from her footage of her cancer treatments. While the film is more of a meditation than an essay, the unexpected connections drawn by this free-flowing brainstorm of imagery succeeds in provoking both thoughts and feelings.

Carlotta Plys-Garzotto was born in Chicago and attended acting and drama therapy school in New York City. She recently relocated to Los Angeles to try out the film industry. Carlotta has always been drawn to the arts whether it's visual, writing, theatre, or film. She has recently been taking improv classes at Upright Citizens Brigade. Carlotta is a Leo with an Aquarius moon. She loves making music videos, eating ice cream, and traveling.

View all of Carlotta Plys-Garzotto's posts.