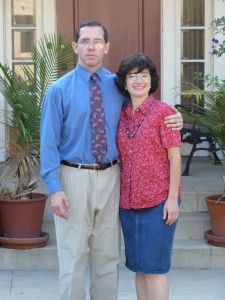 Like a home video version of Saturday Night Live, this political mockumentary takes many jabs at the conservative right side of politics. The film follows middle-aged married couple Ron and Laura as they try to “take back America” from the evils of liberalism. Although the satire has its humorous moments, the over-the-top depiction of the suburban middle class lessens any potential enjoyment. (BKP: 3/5)

All of these hot-button issues are tackled in the new mockumentary Ron and Laura Take Back America written and directed comedy team Mel England and Janice Markham. “Ron” (England) and “Laura” (Markham) play a middle-aged suburban couple who make it their mission to fight against the Democratic party (i.e. protesting Obamacare, gay marriage and undocumented immigrants). However, when they discover that these issues present themselves in everyday life and the people closest to them, they have to take a closer look at what they preach.

There are some enjoyable moments, especially in the way the film is edited. The jump cuts in the style of The Office, Parks and Recreation and Modern Family are belly-laugh inducing. Yet, the production value, for obvious reasons, is far from anything you would see on network television. Yes, it was low budget and yes, it is supposed to reflect Ron and Laura’s own low-quality documentary, but there is a point when the audio and video quality become too low for it not to be a distraction.

Although the film’s production value looks only good enough for a YouTube video (and maybe purposefully so), the filmmakers do use some witty one-liners and over-the-top satire to prove their point. But the exaggerated depiction of the suburban middle class is so irreverent that they will turn off any middle-of-the-road or right-leaning viewers. In turn, the only people who will enjoy this movie or fully partake in its mockery of extremely conservative Republicans … are extremely liberal Democrats laughing at their own jokes. Photos: Mel England as “Ron” and Janice Markham as “Laura”

Q: Does Ron and Laura Take Back America pass the Bechdel-Wallace Test?

“Laura” (Janice Markham) has scenes with her female friends as they talk about politics, fashion and life in general.