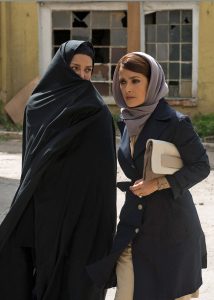 Septembers of Shiraz–based on an award winning novel by Dalia Sofer– falls short of expectations. Directed by Wayne Blair and written by Hanna Weg, the problems with Septembers of Shiraz stem from a clear inability to translate the novel’s nuances into the film’s screenplay.

The lead actors’ attempts to produce believable Iranian accents were distracting, taking away from the great performances given by Iranian actors Shohreh Aghdashloo and Anthony Azizi and Israel actor Alon Aboutboul.

The film also fails to deliver compelling information about the time period in which it is set in (Islamic Tehran in 1979), settling instead for melodramatic caricatures. There are definitely strong scenes (especially between Shohreh Aghdashloo and Salma Hayek), but they are outweighed by the rest of the film. (RAK: 3/5)

It is 1979 and all of the most important Jewish Iranian families in Tehran seem to be celebrating at the beautiful home of “Isaac” (Adrien Brody) and his wife “Farnez” (Salma Hayek). Isaac is a jeweler, who made most of his wealth selling to the royal family and their retinue.

They are celebrating the send off of their eldest son, who is on his way to America to attend a prestigious boarding school. His parents delay leaving their beautiful life for America, not fully understanding that the Revolution by the Islamic Republic will soon affect their very existence.

One day Isaac is arrested at work by Islamic Revolutionaries and brought to jail. The revolutionary guards hold him there because of his wealth and good status with the royal family, but Isaac knows he did not commit any specific crime. His interrogator “Mohsen” (played by award-winning Israel actor Alon Aboutboul) tortures him ruthlessly, hoping that Isaac will reveal something he can use against him (such as evidence that he is actually a Mossad agent working for the Israelis).

At home, Farnez worries incessantly, trying to learn more about her husband’s whereabouts while keeping her young daughter “Shirin” (Ariana Molkara) safe. She no longer can trust anyone, including her longtime housekeeper “Habibeh” (Shohreh Aghdashloo). Habibeh is a religious Muslim whom Isaac saved from the streets.

But even Isaac’s business partners and employees give up on him, looting his store of all the precious stones. One of the worst betrayals comes from Habibeh’s son. Without help from anyone, Isaac and Farnez struggle to develop an escape plan. 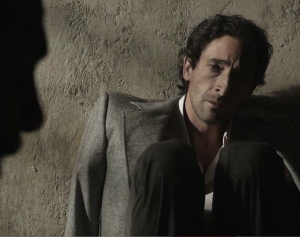 Unfortunately this film denies any nuance, and comes across as an oversimplified version of a very complicated history. The conflicts in the story between the Jewish characters and the Muslim characters are dangerously underdeveloped. These kinds of oversimplifications and underdeveloped relationships give a false sense of a historical narrative.

Random references to Israel are made, without any follow up. And then, sadly, Septembers of Shiraz attempts to become an action-drama halfway through the film with the torture scenes and a preposterous final “escape” act. It seems that the producers chose a director at random, someone completely unaffiliated with Iranian history, who seems to have no regard for the difficult subject matter.

The two leads compete in aggregious overacting, and their false Iranian accents are distracting. The only real talent conveyed onscreen comes from Shohreh Aghdashloo. Having an international cast and crew working on this project was probably a detriment, taking away from the honest narrative and nuance that Dalia Sofer’s novel captured.

It is easy to understand why Dalia Sofer was very reluctant to give the rights away to Hollywood; Septembers of Shiraz completely Hollywood-itized the novel, adding unnecessary drama and oversimplifying her story to entertain commercial America.

Middle photo: Adrien Brody (as Isaac) is imprisoned in the name of the Islamic Revolution.

Bottom photo: Isaac, Farnez and their daughter Shirin (Ariana Molkara) search for escape routes in the streets of a broken Tehran.

Q: Does Septembers of Shiraz pass the Bechdel-Wallace Test?

There are very strong scenes between Habibeh (Shohreh Aghdashloo) and Farnez (Salma Hayek) in which they discuss their long relationship, Habibeh’s loyalties, and the state of their tormented country.

Salma Hayek also has tender scenes with her daughter (played by Ariana Molkara).