Featuring five remarkable women activists across four continents, #Female Pleasure continues the global conversations regarding women and sexuality. Director Barbara Miller’s documentary gives an informative update on the contemporary view of female bodies and reminds a progressive and feminist audience that though we have come a long way, there is still a long way to go. (MJJ: 4/5)

#Female Pleasure is about the feminist work of five extraordinary women: Deborah Feldman, an American former Hasidic jew; Leyla Hussein, a British-Somalian Female Genital Mutilation (FGM) activist; Rokudenashiko, a Japanese vagina artist; Doris Wagner, a German former Catholic nun; and Vithika Yadav, an Indian human rights and love activist. Given such a strong lineup, director Barbara Miller might have felt the need to scale down and tailor her message. However, in an ideal collaborative and feminist manner, she entrusts the women to tell their own stories and the audience members to put together the pieces.

#Female Pleasure switches between different narratives, images and voiceovers in an easy manner and the transitions are well assisted by the carefree hand-held camera which is not doing much extra than simply showing the female protagonists on screen. This in turn makes the cinematography rather plain, but the more focus is put on the women’s narratives themselves. And there is a lot in these narratives: #Female Pleasure abounds with information, perspectives, and approaches. Yet, although the different stories, one common theme exists in the emphasis on the men that in all the five narratives work closely alongside the women in creating change.

The acknowledgment and positive rendering of men across cultures who assist in expanding gender norms are refreshing. But the documentary does also go deeper into subsequent complexities. This is particularly evident in following love activist Vithika Yadav and the incredibly strong shots of an Indian street performance created in the aftermath of the 2012 Delhi gang rape. In the performance, a group of young activists engage with the Indian tradition of rhythm and dance and enact an artistic illustration of rape. The act culminates in the victim being left helpless on the ground while a female performer rages out at the circle of audience/bystanders: “Where are you when we scream for help? Will you raise your voice? Are you brave enough?” The drama then ends with the molester being beaten up to the sound of the audience’s encouragement. An-eye-for-an-eye? Is this really the way forward? #Female Pleasure does not provide an answer, however, it reminds me how easy it is to sit in Sweden and moralize about justice while real struggles are far more complicated than how they appear at a safe distance. 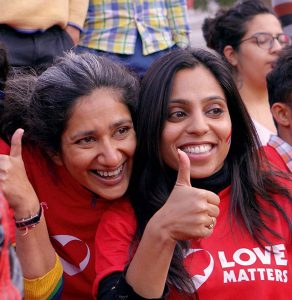 In contrast to the questions raised regarding the righteous path in dealing with revenge, the documentary takes an explicit stance when it comes to religion: all the narratives involve biting critique against the treatment of women and women bodies within organized human faith. This is not the least evident in the stories of Deborah Feldman, Doris Wagner and Leyla Hussein. The women all criticize the orthodox cultures surrounding the big monotheistic faiths and the beyond problematic view and devastating impact these religions have on female bodies. For instance, Feldman describes in detail the Hasidic ritual of cleaning the body after every menstrual period (a period in which men take good care never to come in touch with the woman); Wagner explains the impossibility in living up to the icon of Christian femininity, Virgin Mary (a woman who stayed a virgin all through pregnancy); and Hussein educates various forums of the insurmountable pain caused by FGM (and insists on calling it what it actually is: sexual child abuse).

In addition to the emphasis on male participation as well as the critique against organized religion, the stories have one other thing in common: they all feature women who have chosen to go public. (Although, Rokudenashiko less intentionally as she made headlines when put to trial for obscenity after printing a 3D-art piece of her vagina.) That all the women have used digital and social media to spread their stories reminds us of an important but easily diminished aspect in the debate of the use of online forums: the power of #-movements. What these movements fundamentally display is the inherent democratization that comes with (uncensored) access to the internet. This democratization consists in connecting people who have been kept apart for millennia by domestic walls and enables the creation of larger communities which, by the sheer force of numbers, finally get to make their voices heard. If the price paid for this collaborative opportunity is the space claimed by internet trolls and a certain orange lunatic, it is worth considering the cost.

#Female Pleasure, as evident in the title, speaks of these powerful movements. But the documentary also shows one of the most powerful aspects of the film: the ability to take the viewer out into the world in order to learn. Miller’s documentary, and the five women activists it portrays, is an immensely powerful tool for learning. Because, not only does the documentary present the responsibility we have as global citizens to educate ourselves in the contemporary state of the world, it also highlights the responsibility we have to be critical to the inevitably one-dimensional perspective enforced by the use of the camera. To my understanding, Miller does her best to deal with both of these responsibilities, and I am thus convinced that this documentary would be a greatly valuable instrument for discussions in social science classrooms worldwide. Because, if the key to change is education, #Female Pleasure is one hard piece of metal.

Yes. Although the test is not fully applicable to the documentary style, #Female Pleasure features five remarkable women who tirelessly carry out difficult but important conversations across genders and cultures.