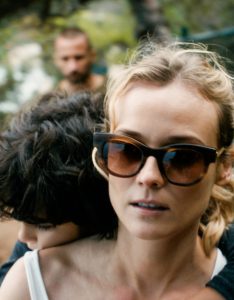 Written and directed by Alice Winocour, Disorder follows a soldier back from Afghanistan as he struggles with post-traumatic stress disorder and coping with hallucinations and hearing loss. Through the help of some friends, “Vincent” (Matthais Schoenaerts) secures a job as a member of a security team to earn some extra cash. The job seems simple: make sure Imad Whalid’s (Percy Kemp) party goes off without a hitch. But when Vincent is asked to stay on as security for Whalid’s family, his paranoia begins creeping in, affecting his better judgment.

Disorienting and unsettling, Winocour does an excellent job of keeping us on our toes in this dramatic thriller as we begin to discover that Vincent’s paranoia may be anything but. (LMB: 3.5/5)

“Vincent” (Matthais Schoenaerts) has just returned from a rigorous tour in Afghanistan and is hired to work security for Lebanese businessman, “Imad Whalid” (Percy Kemp) for a party at his massive villa in France, called “Maryland”. After the party, Whalid is called away on business and Vincent is asked to stay on as security for Whalid’s family. During his time at Maryland, Vincent develops a fascination with Whalid’s wife “Jessie” (Diane Kruger), watching her from a distance. As Vincent acts as chauffer, security guard, and peace of mind for Jessie and her son “Ali” (Zaïd Errougui-Demonsant), he struggles to maintain his grasp on reality.

Throughout the film Vincent finds himself questioning what is real and what is a hallucination. The audience experiences this paranoia through magnificent sound design and interesting camera angles, viewing the world through Vincent’s eyes and ears. 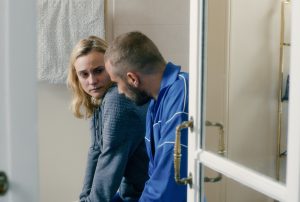 During filming Schoenaert limited his sleep to only two hours a night to better understand and relate to his character, which helps create his authentic, paranoid, on-edge performance as Vincent. But while the sound design and performances are wonderful, as a whole, the film is lacking. Plot holes make it difficult to connect the dots and leave us wondering what is happening and why.

Vincent’s troubled past is never discussed, leaving us wanting more backstory on the specific ways he was affected by his time in Afghanistan. Though we see his house, which he shares with his mother, we never meet her and crave more information about his humble life at home. We get small glimpses into Jessie’s past, but only enough to leave us wanting more, and we never quite learn enough about Whalid to understand the trouble that he and Jessie are in.

That being said, Disorder’s uniqueness in style and subtlety are definitely still worth the watch. With the help of an incredible soundtrack, which incorporates gunshot-esque bangs and mysterious whispers, director Alice Winocour creates an intriguing film that will leave you with a little paranoia of your own.

Top Photo: Jessie with her son Ali walking back from the beach as Vincent follows behind.

Middle Photo: Jessie and Vincent share a tender moment amidst the chaos.

This film absolutely does not. Jessie, the only female character, interacts solely with men, talking about men. Our only female lead plays the stereotypical damsel in distress.